Idiopathic nephrotic syndrome (INS) is characterized by proteinuria and renal sodium retention leading to edema. This sodium retention is usually attributed to epithelial sodium channel (ENaC) activation after plasma aldosterone increase. However, most nephrotic patients show normal aldosterone levels. Using a corticosteroid-clamped (CC) rat model of INS (CC-PAN), we showed that the observed electrogenic and amiloride-sensitive Na retention could not be attributed to ENaC. We then identified a truncated variant of acid-sensing ion channel 2b (ASIC2b) that induced sustained acid-stimulated sodium currents when coexpressed with ASIC2a. Interestingly, CC-PAN nephrotic ASIC2b-null rats did not develop sodium retention. We finally showed that the expression of the truncated ASIC2b in the kidney was dependent on the presence of albumin in the tubule lumen and activation of ERK in renal cells. Finally, the presence of ASIC2 mRNA was also detected in kidney biopsies from patients with INS but not in any of the patients with other renal diseases. We have therefore identified a variant of ASIC2b responsible for the renal Na retention in the pathological context of INS.

Long and truncated variants of ASIC2b. 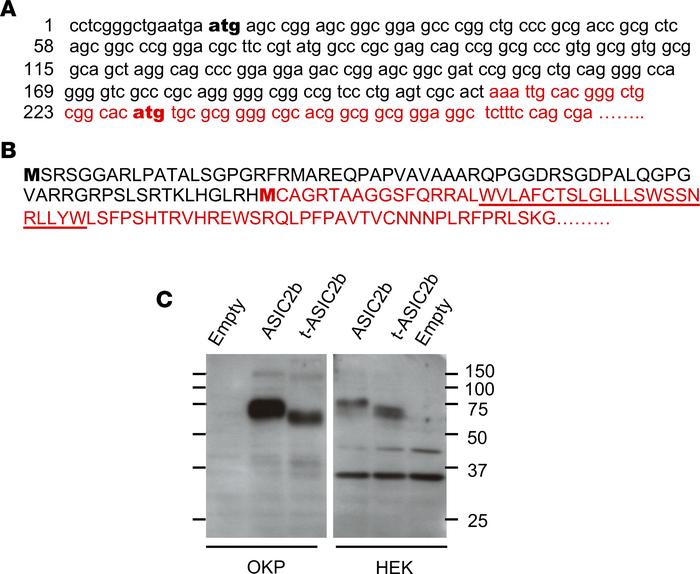