sEVs derived from PH-Fibs, but not from CO-Fibs, mediate BMDM activation toward a proinﬂammatory phenotype. 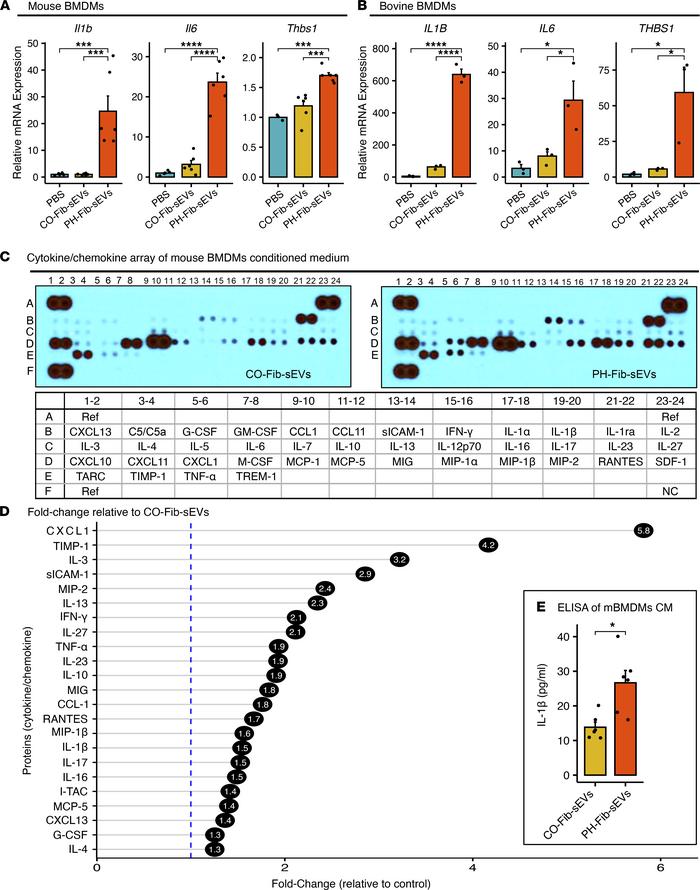 () Mouse BMDMs incubated with sEVs from PH-Fibs, but not those from CO-Fibs ( = 6, each group), significantly upregulated , , and expression. () Bovine BMDMs, incubated with (autogenic) sEVs from PH-Fibs, but not CO-Fibs ( = 3, each group), profoundly (note the scale differences between and ) upregulated , , and expression. ( and ) Mouse BMDMs were incubated with sEVs from CO-Fibs or PH-Fibs for 16 hours; then culture supernatant was collected and subjected to Mouse Cytokine/Chemokine Array analysis (), where the table (lower panel) shows the detected analytes and their location on the membrane. () The data obtained from () were quantified using NIH ImageJ software, and mean pixel density was normalized to the density of the respective positive controls. Relative expression of cytokines was computed, and the fold change of PH-Fib-sEVs, relative to CO-Fib-sEVs, is shown. () IL-1β released by BMDMs incubated with CO-Fib-sEVs or PH-Fib-sEVs was confirmed by ELISA. Data are presented as mean ± SEM (, , and ) and mean (). One-way ANOVA ( and ) followed by Tukey’s multiple-comparison test was performed. Unpaired test with Welch’s correction () was used for comparison between 2 groups. * < 0.05, *** < 0.001, **** < 0.0001. sEVs, small extracellular vesicles; BMDMs, bone marrow–derived macrophages; PH, pulmonary hypertension; PH-Fibs, fibroblasts of calves with severe PH; CO-Fibs, fibroblasts of age-matched controls.