BACKGROUND Early diagnosis and treatment are key to the long-term survival of lung cancer patients. Although CT has significantly contributed to the early diagnosis of lung cancer, there are still consequences of excessive or delayed treatment. By improving the sensitivity and specificity of circulating tumor cell (CTC) detection, a solution was proposed for differentiating benign from malignant pulmonary nodules.METHODS In this study, we used telomerase reverse transcriptase–based (TERT-based) CTC detection (TBCD) to distinguish benign from malignant pulmonary nodules < 2 cm and compared this method with the pathological diagnosis as the gold standard. FlowSight and FISH were used to confirm the CTCs detected by TBCD.RESULTS Our results suggest that CTCs based on TBCD can be used as independent biomarkers to distinguish benign from malignant nodules and are significantly superior to serum tumor markers. When the detection threshold was 1, the detection sensitivity and specificity of CTC diagnosis were 0.854 and 0.839, respectively. For pulmonary nodules ≤ 1 cm and 1–2 cm, the sensitivity and specificity of CTCs were both higher than 77%. Additionally, the diagnostic ability of CTC-assisted CT was compared by CT detection. The results show that CT combined with CTCs could significantly improve the differentiation ability of benign and malignant nodules in lung nodules < 2 cm and that the sensitivity and specificity could reach 0.899 and 0.839, respectively.CONCLUSION TBCD can effectively diagnose pulmonary nodules and be used as an effective auxiliary diagnostic scheme for CT diagnosis.FUNDING National Key Research and Development Project grant nos. 2019YFC1315700 and 2017YFC1308702, CAMS Initiative for Innovative Medicine grant no. 2017-I2M-1-005, and National Natural Science Foundation of China grant no. 81472013.

Comparison of TBCD with CT in the enrolled patient cohort. 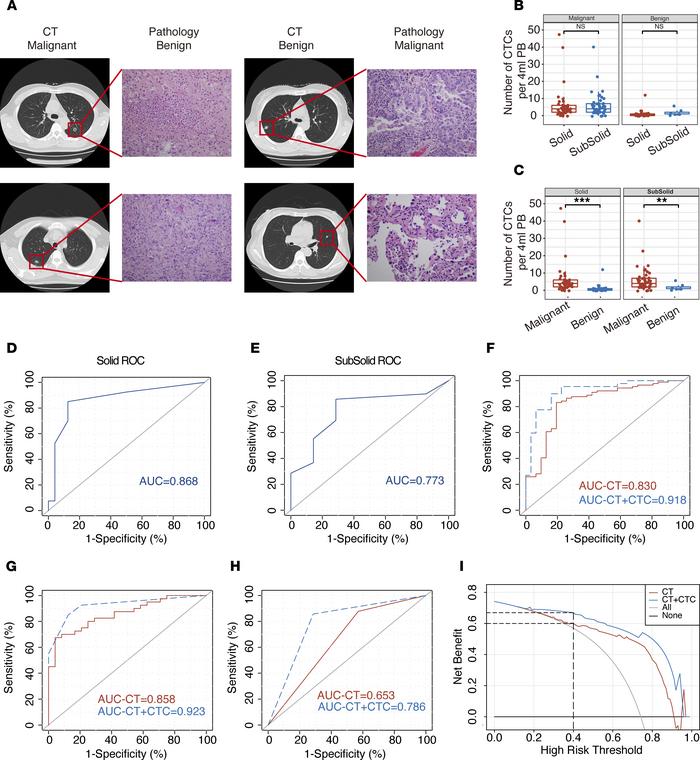