The programmed death-1 (PD-1) and the PD ligand 1 (PD-L1) interaction represents a key immune checkpoint within the tumor microenvironment (TME), and PD-1 blockade has led to exciting therapeutic advances in clinical oncology. Although IFN-γ–dependent PD-L1 induction on tumor cells was initially thought to mediate the suppression on effector cells, recent studies have shown that PD-L1 is also expressed at high level on tumor-associated macrophages (TAMs) in certain types of tumors. However, the precise role of PD-L1 expression on TAMs in suppressing antitumor immunity within the TME remains to be defined. Using a myeloid-specific Pdl1-knockout mouse model, here we showed definitive evidence that PD-L1 expression on TAMs is critical for suppression of intratumor CD8+ T cell function. We further demonstrated that tumor-derived Sonic hedgehog (Shh) drives PD-L1 expression in TAMs to suppress tumor-infiltrating CD8+ T cell function, leading to tumor progression. Mechanistically, Shh-dependent upregulation of PD-L1 in TAMs is mediated by signal transducer and activator of transcription 3, a cascade that has not been previously reported to our knowledge. Last, single-cell RNA sequencing analysis of human hepatocellular carcinoma revealed that PD-L1 is mainly expressed on M2 TAMs, supporting the clinical relevance of our findings. Collectively, our data revealed an essential role for Shh-dependent PD-L1 upregulation in TAMs in suppressing antitumor immunity within the TME, which could lead to the development of new immunotherapeutic strategies for treating cancer. 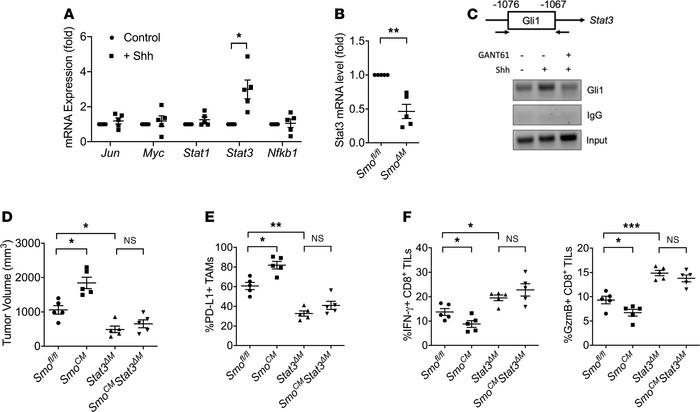 () , , , , and mRNA levels in control and Shh-treated BMDMs were measured by qRT-PCR. Expressions were normalized to β-actin () and compared with control. () mRNA levels in and ΔM TAMs were measured by qRT-PCR. Expressions were normalized to reference gene and compared to . () Gli1 transcription factor was bound to the promoter region in BMDMs treated by Shh as demonstrated by ChIP. Gli1 activity was inhibited using 5 μM GANT61. () Tumor volumes of Hepa1-6 hepatoma cells subcutaneously inoculated in , , ΔM, and ΔM mice on day 20 at sacrifice. () Expressions of PD-L1 on TAMs were upregulated in and decreased in ΔM and ΔM mice. () Productions of IFN-γ and GzmB by intratumor CD8+ T cells were suppressed in and higher in ΔM and ΔM mice. Values are mean ± SEM of a minimum of 3 independent experiments. * < 0.05. ** < 0.005. *** < 0.0005. = 5 biological replicates per group ( and , –). = 3 technical replicates per group (). Two-tailed Student’s test ( and ). One-way ANOVA (–).