Large independent analyses on cancer cell lines followed by functional studies have identified Schlafen 11 (SLFN11), a putative helicase, as the strongest predictor of sensitivity to DNA-damaging agents (DDAs), including platinum. However, its role as a prognostic biomarker is undefined, partially due to the lack of validated methods to score SLFN11 in human tissues. Here, we implemented a pipeline to quantify SLFN11 in human cancer samples. By analyzing a cohort of high-grade serous ovarian carcinoma (HGSOC) specimens before platinum-based chemotherapy treatment, we show, for the first time to our knowledge, that SLFN11 density in both the neoplastic and microenvironmental components was independently associated with favorable outcome. We observed SLFN11 expression in both infiltrating innate and adaptive immune cells, and analyses in a second, independent, cohort revealed that SLFN11 was associated with immune activation in HGSOC. We found that platinum treatments activated immune-related pathways in ovarian cancer cells in an SLFN11-dependent manner, representative of tumor-immune transactivation. Moreover, SLFN11 expression was induced in activated, isolated immune cell subpopulations, hinting that SLFN11 in the immune compartment may be an indicator of immune transactivation. In summary, we propose SLFN11 is a dual biomarker capturing simultaneously interconnected immunological and cancer cell–intrinsic functional dispositions associated with sensitivity to DDA treatment. 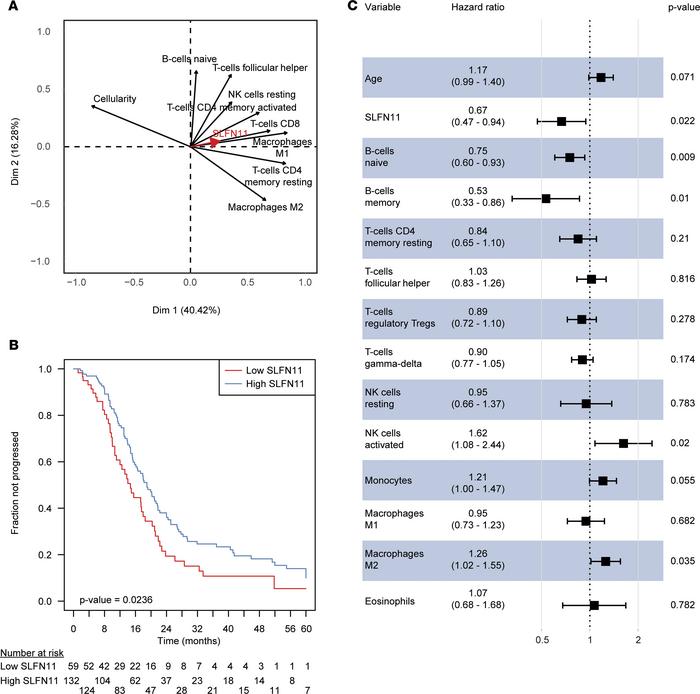 () Variable correlation plot of the PCA including SLFN11 transcript, cancer cellularity, and CIBERSORTx immune cell subpopulations significant by univariable correlation at FDR < 0.05. The 2 axes represent the first principal components explaining the greatest fraction of the variance of the analyzed data set, with percentage of explained variability in parentheses. The relative position of the variables toward each other explains their relative correlation, whereas their distance from the intersect accounts for their contribution to the components. SLFN11 is represented with a thick red arrow for sake of clarity. () Kaplan-Meier plot showing PFI stratified by SLFN11 transcript (“high” if above the lower tertile of expression in the data set, “low” if below). The progressed fraction of patients ( axis) is plotted against time expressed in months from the end of first-line CT, censored at 60 months ( axis). Numbers at risk are reported below the plot. value in the bottom left of the plot is from the Wald statistics for the univariable Cox’s regression. () Forest plot of hazard ratios ( axis, in log scale) for variables retained in the lasso-selected multiple Cox’s regression model. Point HR estimates are reported below each variable together with 95% CIs in parentheses, whereas adjusted values for each variable are on the right side of the plot. Filled black squares represent HR estimates, with relative 95% CIs shown as horizontal lines with brackets.