Mutations in LAMB2, encoding laminin β2, cause Pierson syndrome and occasionally milder nephropathy without extrarenal abnormalities. The most deleterious missense mutations that have been identified affect primarily the N-terminus of laminin β2. On the other hand, those associated with isolated nephropathy are distributed across the entire molecule, and variants in the β2 LEa-LF-LEb domains are exclusively found in cases with isolated nephropathy. Here we report the clinical features of mild isolated nephropathy associated with 3 LAMB2 variants in the LEa-LF-LEb domains (p.R469Q, p.G699R, and p.R1078C) and their biochemical characterization. Although Pierson syndrome missense mutations often inhibit laminin β2 secretion, the 3 recombinant variants were secreted as efficiently as WT. However, the β2 variants lost pH dependency for heparin binding, resulting in aberrant binding under physiologic conditions. This suggests that the binding of laminin β2 to negatively charged molecules is involved in glomerular basement membrane (GBM) permselectivity. Moreover, the excessive binding of the β2 variants to other laminins appears to lead to their increased deposition in the GBM. Laminin β2 also serves as a potentially novel cell-adhesive ligand for integrin α4β1. Our findings define biochemical functions of laminin β2 variants influencing glomerular filtration that may underlie the pathogenesis of isolated nephropathy caused by LAMB2 abnormalities. 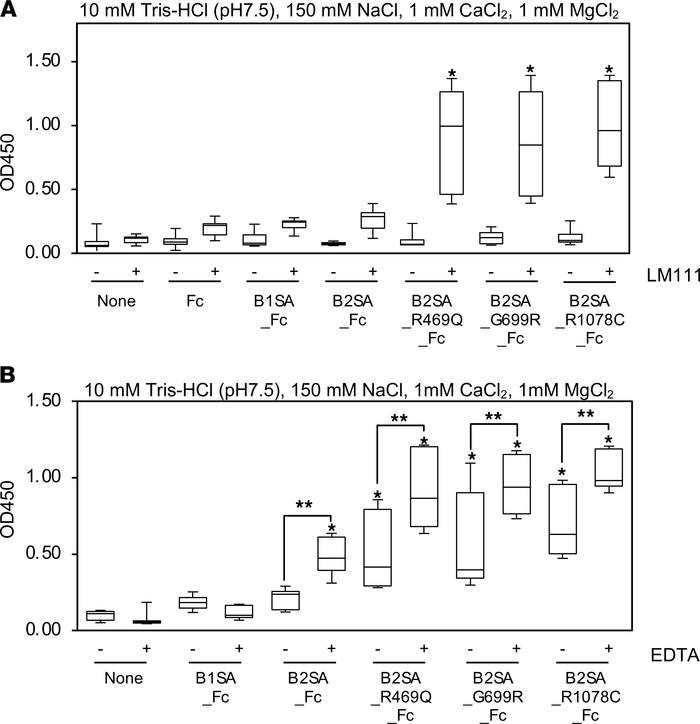