Exchange proteins directly activated by cAMP (Epacs) are abundantly expressed in the renal tubules. We used genetic and pharmacological tools in combination with balance, electrophysiological, and biochemical approaches to examine the role of Epac1 and Epac2 in renal sodium handling. We demonstrate that Epac1–/– and Epac2–/– mice exhibit a delayed anti-natriuresis to dietary sodium restriction despite augmented aldosterone levels. This was associated with a significantly lower response to the epithelial Na+ channel (ENaC) blocker amiloride, reduced ENaC activity in split-opened collecting ducts, and defective posttranslational processing of α and γENaC subunits in the KO mice fed with a Na+-deficient diet. Concomitant deletion of both isoforms led to a marginally greater natriuresis but further increased aldosterone levels. Epac2 blocker ESI-05 and Epac1&2 blocker ESI-09 decreased ENaC activity in Epac WT mice kept on the Na+-deficient diet but not on the regular diet. ESI-09 injections led to natriuresis in Epac WT mice on the Na+-deficient diet, which was caused by ENaC inhibition. In summary, our results demonstrate similar but nonredundant actions of Epac1 and Epac2 in stimulation of ENaC activity during variations in dietary salt intake. We speculate that inhibition of Epac signaling could be instrumental in treatment of hypertensive states associated with ENaC overactivation. 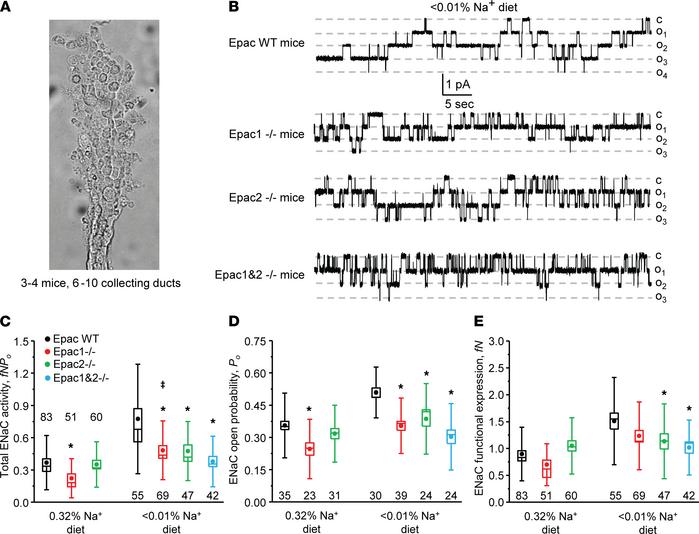