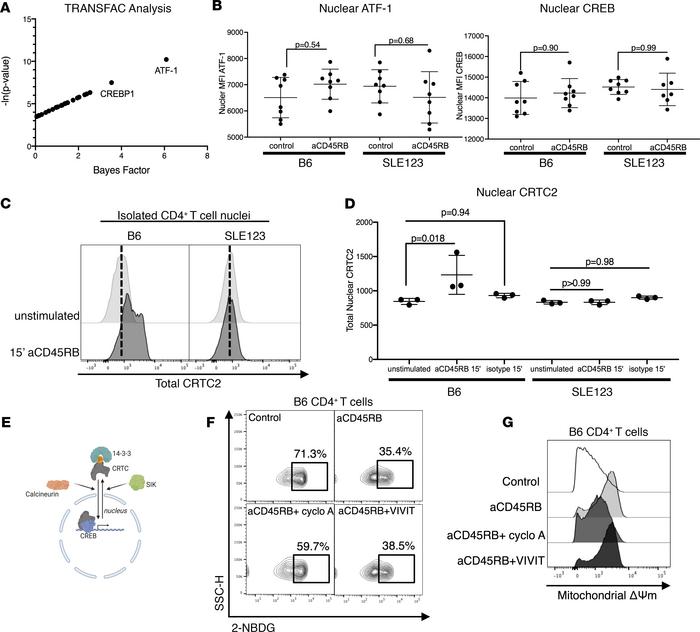 () TRANSFAC analysis of the metabolic genes regulated by aCD45RB in B6 mice revealed ATF-1 and CREBP likely regulated these genes. () As ATF-1 and CREB share similar binding motifs, we assessed the nuclear import of both CREB and ATF-1 in aCD45RB-treated and untreated CD4+ T cells from B6 and SLE. Briefly, nuclei from purified CD4+ T cells were extracted and stained for total CREB and ATF-1. The nuclear localized amount of each protein was measured by flow cytometry. No significant difference was noted in any of the conditions regardless of strain or treatment. = 8 per group, 9- to 12-week-old female mice. ( and ) The transcriptional activity of CREB can be modified by translocation of CRTCs. Nuclear staining demonstrated translocation of CRTC2 to the nucleus following 15 minutes of aCD45RB stimulation only in isolated nuclei from B6 CD4+ T cells. SLE123 mice did not demonstrate the same response. Quantified in . Representative of 3 repeats with at least 3 biologic replicates per group, utilizing 9- to 12-week-old female mice. () The translocation of CRTC proteins is controlled by the phosphatase calcineurin and the SIK, which control nuclear import and export respectively. ( and ) Pretreatment of B6 CD4+ T cells with calcineurin inhibitor, cyclosporine A, but not the NFAT-specific inhibitor, VIVIT (a major target of calcineurin), prevented the metabolic changes induced by aCD45RB. Cyclosporine prevented the downregulation of glucose uptake and changes in mitochondrial dynamics. The NFAT inhibitor VIVIT had no effect on the metabolic changes in glucose uptake or mitochondrial Δψ induced by aCD45RB. Analyzed by 2-way ANOVA and Tukey’s multiple comparison test. = 5 per each treatment group, 9- to 12-week-old female mice.