Anti-CD45RB drives transcriptional changes in metabolism in B6 CD4+ T cells, which are resisted by SLE123 mice. 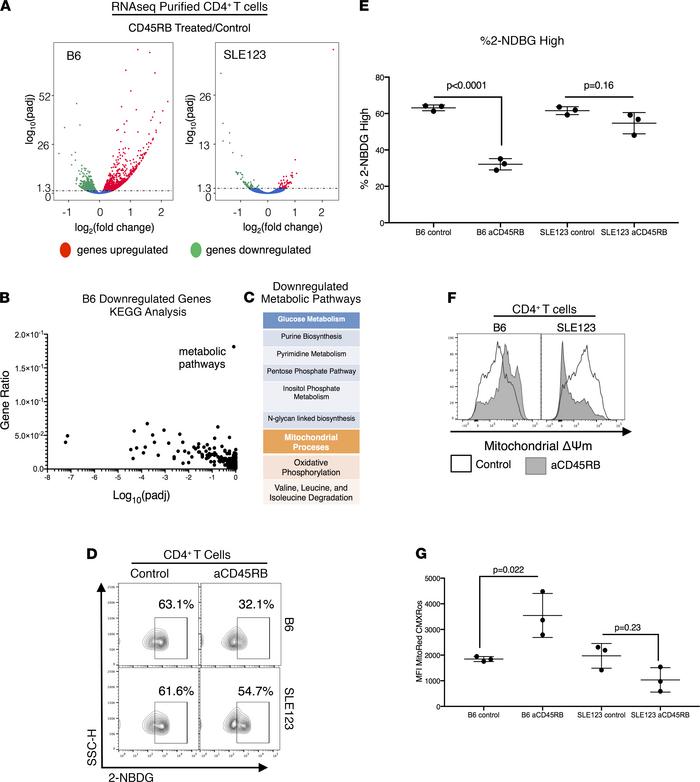 () CD4+ T cells were isolated from B6 and SLE123 mice that had been treated with a standard 7-day course of aCD45RB or left untreated ( = 3, 9- to 12-week-old female SLE or B6 mice). RNA-Seq was performed and analyzed for differential gene expression. The volcano plot demonstrates regulation of a subset of genes in response to aCD45RB only in B6 mice, while SLE123 mice largely resisted transcriptional changes. () KEGG analysis of the downregulated genes in B6 mice revealed metabolic pathways to have the highest gene ratio of regulated pathways. () Genes in this KEGG term could be classified broadly into 2 categories that impact both glucose metabolism and mitochondrial processes. (Full gene list available in B.) ( and ) Analysis of glucose uptake using a fluorescent glucose analog, 2NBDG, revealed a decrease in glucose uptake in CD4+ T cells only from B6 mice treated with CD45RB, which was resisted by SLE123 mice. This corroborated the observation of downregulation of genes associated with glucose metabolism. The percentage of CD4+ T cells with high glucose uptake is quantified in . ( and ) Mitochondrial membrane potential, a measure of mitochondrial activity, was assessed in both B6 and SLE123 CD4+ T cells by flow cytometry utilizing MitoredCMXRos. This analysis revealed increased mitochondrial membrane potential (Δψ) in CD4+ T cells from B6 mice treated with aCD45RB. SLE123 mice resisted these changes and demonstrated a decrease in membrane potential. The median fluorescence intensity of MitoredCMXRos from is quantified in . The analyses in – were repeated at least 7 times with 3 or more 9- to 12-week-old female SLE123 or B6 mouse replicates in each group. Analyzed using a 1-way ANOVA and Tukey’s multiple comparison test.