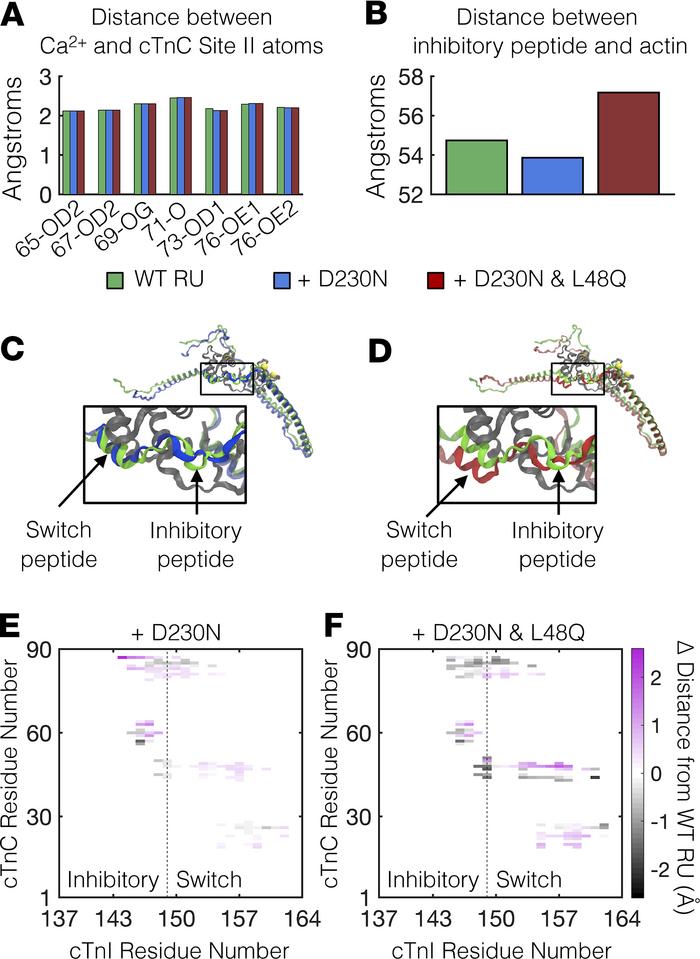 () Distances (in Å) between the Ca2+ ion and each Ca2+-coordinating oxygen atom in site II of cTnC for a WT RU (green), a RU with D230N-Tm (blue) and a RU with both D230N-Tm and L48Q cTnC (red). () Distances (in Å) between the inhibitory peptide of cTnI and the center of mass of the closest actin monomer for each RU. The color scheme is the same as described for panel . ( and ) Structural analysis of cTnC and cTnI subunits in the 3 different RUs. The cTnI subunit is shown as green when in the WT RU, blue when in the RU with D230N-Tm, and red when in the RU with both D230N-Tm and L48Q cTnC. cTnC is shown in gray, and Ca2+ ions are indicated by the yellow spheres. The switch and inhibitory peptides of cTnI are indicated by the arrows in the close-up insets. ( and ) Changes in the interactions between cTnC and the inhibitory and switch peptides of cTnI, relative to the WT RU, for the RU containing D230N-Tm () and the RU containing both D230N-Tm and L48Q cTnC (). The color bar denotes the change in distances (in Å) between cTnC and cTnI residues in each variant RU relative to those in the WT RU. Thus, magenta indicates movement of cTnC–cTnI residues away from one another and black indicates movement of cTnC–cTnI residues toward one another (relative to WT). Residues corresponding to the inhibitory and switch peptides of cTnI are on either side of the vertical dashed line. Tm, tropomyosin; cTnC, cardiac troponin C; RU, regulatory unit; Ca2+, calcium; cTnI, cardiac troponin I.