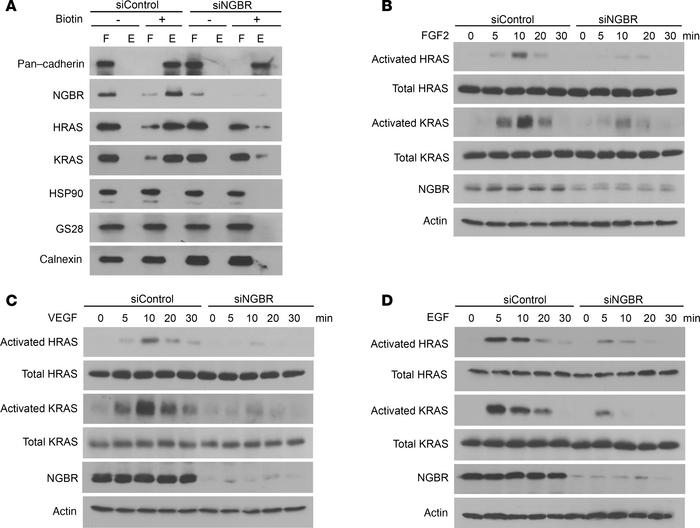 () NGBR depletion decreased the protein levels of NGBR, HRAS, and KRAS in the fraction of biotinylated cell surface proteins. HemSCs surface proteins were biotinylated under nonpermeabilized conditions and isolated using streptavidin agarose resin from the Pierce Cell Surface Protein Isolation Kit as described in Methods. Proteins were determined by Western blot analysis using antibodies that detect endogenous proteins. Pan-cadherin, calnexin, and GS28 are markers of plasma membrane, ER membrane, and Golgi membrane markers, respectively. The plus symbol (+) denotes results for cells treated with the Sulfo-NHS-SS-Biotin reagent; the minus symbol (−) denotes results for cells that were not treated with the biotin reagent but were otherwise used in the kit procedure. The lanes designated “F” show proteins that flowed through the columns because they did not bind the avidin agarose resin, and the lanes designated “E” show proteins that were eluted from the columns after binding to the avidin agarose resin. () NGBR knockdown decreased the FGF2-induced (), VEGF-induced (), and EGF-induced () activation of HRAS and KRAS in HemSCs. The activated RAS proteins were isolated using GST-RBD beads, and protein levels were determined by Western blot. Data are validated in 3 independent experiments. NGBR, NOGOB receptor; HemSCs, hemangioma stem cells; GST-RBD, GST-tagged Ras-binding domain.