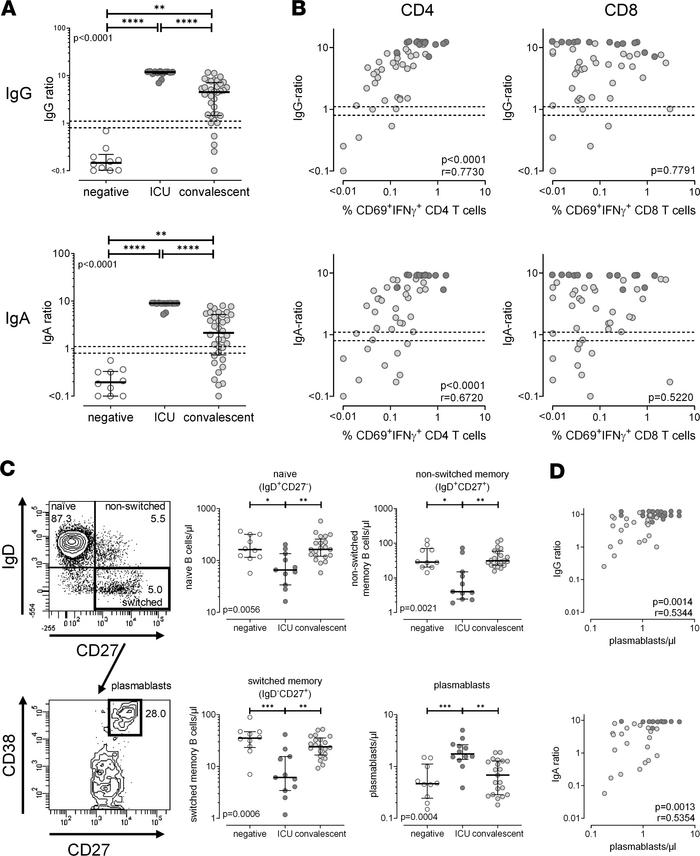 () Levels of SARS-CoV-2–specific IgG and IgA were compared among SARS-CoV-2–negative individuals (negative, = 10), patients with severe COVID-19 (ICU, = 14), and convalescent patients ( = 36). () Correlation between levels of SARS-CoV-2–specific IgG or IgA with frequencies of SARS-CoV-2–specific CD69+IFN-γ+ CD4+ or CD8+ T cells expressed in patients with SARS-CoV-2. () Representative contour plots of a 64-year-old hospitalized patient showing the differentiation status of B cells characterized by surface expression of IgD and CD27, with plasmablasts identified among switched memory B cells by additional staining of CD38. Numbers of B cell subpopulations and plasmablasts were compared between groups, and () plasmablasts were correlated with levels of SARS-CoV-2–specific IgG and IgA. Antibody levels were determined semiquantitatively by dividing the optical density of an individual sample by that of a positive control serum. Bars in and represent medians with IQRs. Differences between the groups were calculated using Kruskal-Wallis test and Dunn’s posttest. * < 0.05, ** < 0.01, *** < 0.001, **** < 0.0001. Correlations in and were analyzed according to Spearman. Dotted lines indicate detection limits for IgG and IgA, indicating negative, intermediate, and positive levels, respectively, as per manufacturer’s instructions.