Amyotrophic lateral sclerosis (ALS) and frontotemporal lobar degeneration (FTLD), 2 incurable neurodegenerative disorders, share the same pathological hallmark named TDP43 (TAR DNA binding protein 43) proteinopathy. This event is characterized by a consistent cytoplasmic mislocalization and aggregation of the protein TDP43, which loses its physiological properties, leading neurons to death. Antibody-based approaches are now emerging interventions in the field of neurodegenerative disorders. Here, we tested the target specificity, in vivo distribution, and therapeutic efficacy of a monoclonal full-length antibody, named E6, in TDP43-related conditions. We observed that the antibody recognizes specifically the cytoplasmic fraction of TDP43. We demonstrated its ability in targeting large neurons in the spinal cord of mice and in reducing TDP43 mislocalization and NF-κB activation. We also recognized the proteasome as well as the lysosome machineries as possible mechanisms used by the antibody to reduce TDP43 proteinopathy. To our knowledge, this is the first report showing the therapeutic efficacy and feasibility of a full-length antibody against TDP43 in reducing TDP43 proteinopathy in spinal neurons of an ALS/FTLD mouse model. 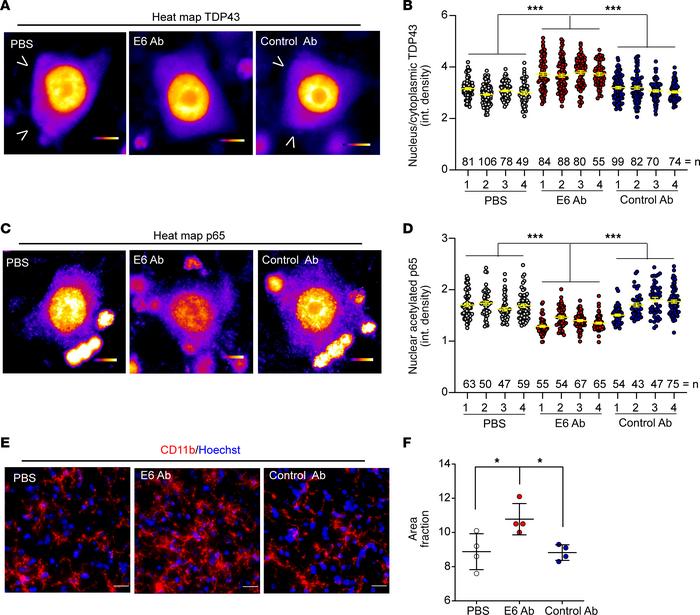