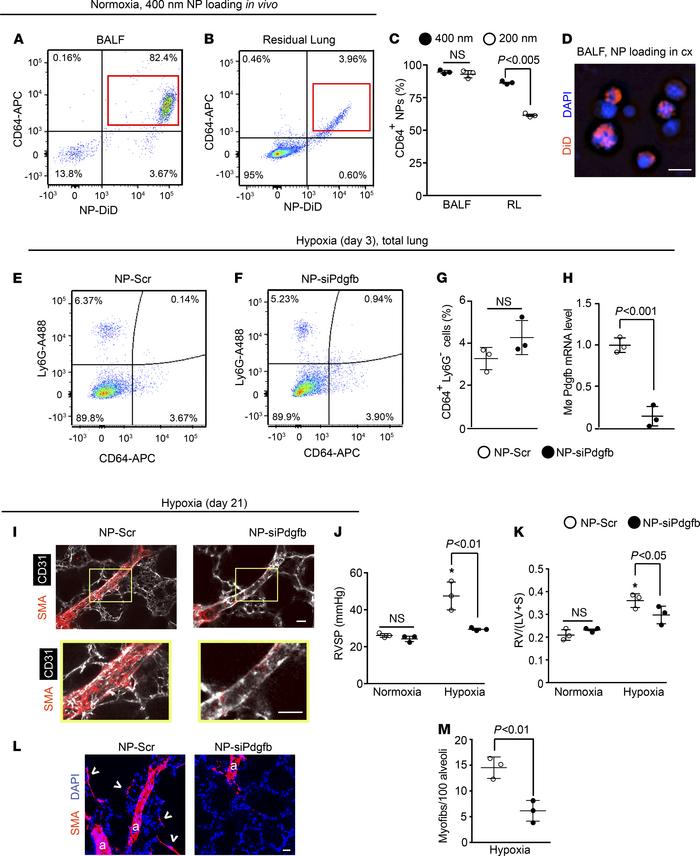 ( and ) Nanoparticles (diameter 400 nm) loaded with the dye DiD were administered orotracheally to normoxic mice, and 12 hours later, cells from BALF and residual lung were stained for CD64 and subjected to flow cytometric analysis. () Quantification of experiments from and and , showing percentage of BALF or residual lung (RL) cells containing DiD+ nanoparticles (diameter 400 or 200 nm as indicated) expressing CD64. = 3 mice per treatment. () BALF cells were harvested from normoxic mice, cultured with DiD-loaded 400 nm nanoparticles for 6 hours, and then stained for nuclei (DAPI). (–) Nanoparticles of 400 nm diameter were loaded with siRNA targeted against Pdgfb or scrambled (Scr) RNA, then administered to mice at the onset of hypoxia and twice per week thereafter. ( and ) Lungs were isolated from mice at hypoxia day 3, stained for Ly6G and CD64, and subjected to flow cytometry, and the percentage of CD64+Ly6G– macrophages was quantified (). = 3 mice per treatment. () Pdgfb RNA levels of CD64+Ly6G– macrophages isolated as in and were quantified by qRT-PCR. = 3 mice per treatment with qRT-PCR done in triplicate. () Mice were treated with hypoxia for 21 days or maintained in normoxia. For hypoxic mice, sections containing distal arterioles in the L.L1.A1 area () or alveolar region () were stained for CD31 and SMA. Boxed regions are shown below as close-ups. RVSP (), Fulton index (), and number of myofibroblasts (arrowheads) per 100 alveoli were measured. More than 500 alveoli per mouse were quantified. Arterioles are labeled with “a” in . = 3 mice per treatment group. One-way ANOVA with Tukey’s multiple-comparison test (, , and ) and Student’s test were used (, , and ). * vs. normoxia, < 0.05. Scale bars: 10 μm () and 25 μm ( and ).