A maternal Western-style diet (WSD) is associated with poor reproductive outcomes, but whether this is from the diet itself or underlying metabolic dysfunction is unknown. Here, we performed a longitudinal study using regularly cycling female rhesus macaques (n = 10) that underwent 2 consecutive in vitro fertilization (IVF) cycles, one while consuming a low-fat diet and another 6–8 months after consuming a high-fat WSD. Metabolic data were collected from the females prior to each IVF cycle. Follicular fluid (FF) and oocytes were assessed for cytokine/steroid levels and IVF potential, respectively. Although transition to a WSD led to weight gain and increased body fat, no difference in insulin levels was observed. A significant decrease in IL-1RA concentration and the ratio of cortisol/cortisone was detected in FF after WSD intake. Despite an increased probability of isolating mature oocytes, a 44% reduction in blastocyst number was observed with WSD consumption, and time-lapse imaging revealed delayed mitotic timing and multipolar divisions. RNA sequencing of blastocysts demonstrated dysregulation of genes involved in RNA binding, protein channel activity, mitochondrial function and pluripotency versus cell differentiation after WSD consumption. Thus, short-term WSD consumption promotes a proinflammatory intrafollicular microenvironment that is associated with impaired preimplantation development in the absence of large-scale metabolic changes. 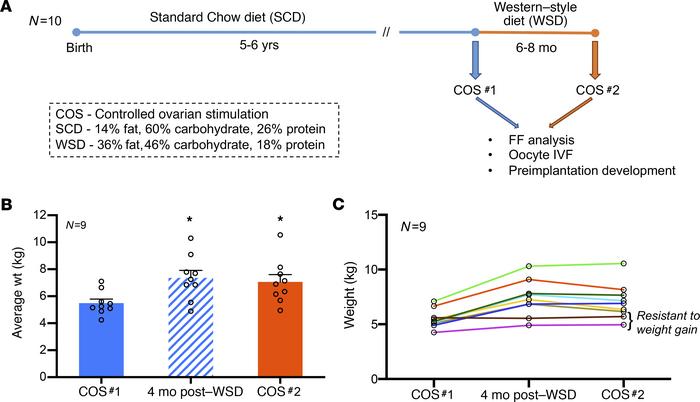 () A cohort of female rhesus macaques ( = 10) consuming SCD since birth underwent a baseline ovarian stimulation protocol (COS #1), which was then followed by 6–8 months of high-fat WSD consumption and a second stimulation protocol (COS #2). FF and oocytes were collected from each COS to assess the intrafollicular environment and post-IVF embryo development, respectively. () A significant difference (* < 0.05; ± SEM) was observed in the average weight of the female rhesus macaques measured after COS #1 while consuming SCD compared with 4 months after WSD consumption and after COS #2 (6–8 months after WSD consumption). () Individual weight gain comparisons revealed the resistance to weight gain displayed by 2 females. One female who was nonrespondent to COS #2, but still gained weight after being switched to a WSD, was excluded from the analysis for and . Data were collected from all the females that underwent both COS cycles ( = 9), and statistical significance was analyzed by 1-way ANOVA and a post-hoc test comparison.