BACKGROUND The reshaping of the immune landscape by nivolumab (NIVO) and ipilimumab (IPI) and its relation to patient outcomes is not well described.METHODS We used high-parameter flow cytometry and a computational platform, CytoBrute, to define immunophenotypes of up to 15 markers to assess peripheral blood samples from metastatic melanoma patients receiving sequential NIVO > IPI or IPI > NIVO (Checkmate-064).RESULTS The 2 treatments were associated with distinct immunophenotypic changes and had differing profiles associated with response. Only 2 immunophenotypes were shared but had opposing relationships to response/survival. To understand the impact of sequential treatment on response/survival, phenotypes that changed after the initial treatment and differentiated response in the other cohort were identified. Immunophenotypic changes occurring after NIVO were predominately associated with response to IPI > NIVO, but changes occurring after IPI were predominately associated with progression after NIVO > IPI. Among these changes, CD4+CD38+CD39+CD127–GARP– T cell subsets were increased after IPI treatment and were negatively associated with response/survival for the NIVO > IPI cohort.CONCLUSION Collectively, these data suggest that the impact of IPI and NIVO on the immunophenotypic landscape of patients is distinct and that the impact of IPI may be associated with resistance to subsequent NIVO therapy, consistent with poor outcomes in the IPI > NIVO cohort of Checkmate-064. 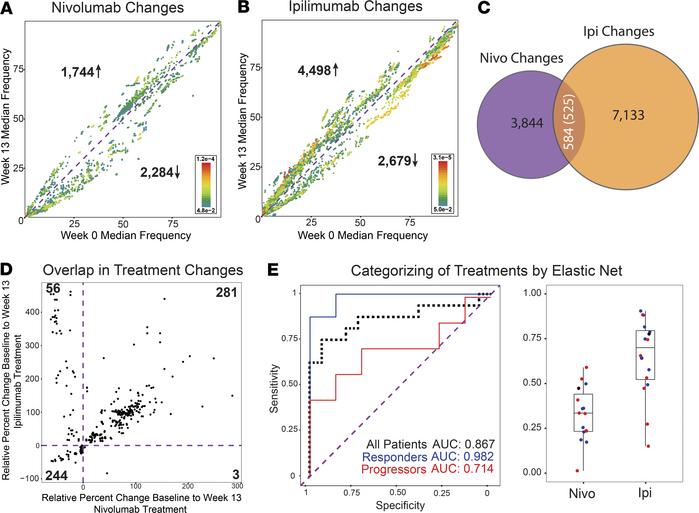