Effect of the rs179008 genotype on IP-10 and HIV-1 nucleic acid measurements across a PRIMO subcohort. 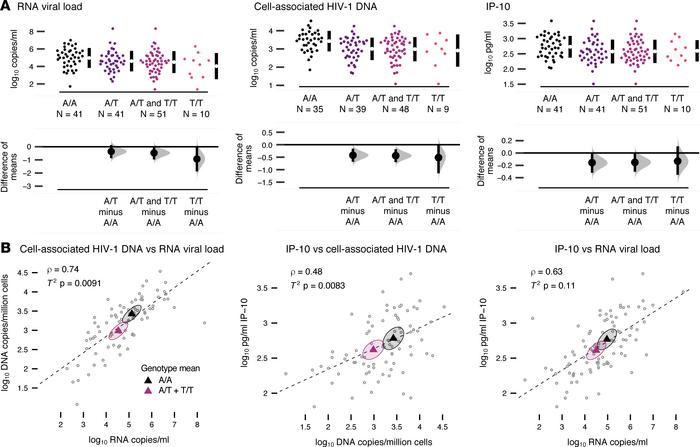 ELISA quantitation of IP-10 was performed on the 10 PRIMO female patients of rs179008 T/T genotype plus randomly drawn subsets of A/A and A/T women from the same cohort ( = 92 total). () Estimation plots comparing rs179008 genotype groups against the A/A baseline with regard to viral load, HIV-1 cell–associated DNA ( = 83 total), and IP-10 values. Top, raw data groups with mean ± SD shown as a gapped line. Effect size is plotted underneath as the difference in means and its 95% CI estimated by bootstrap resampling; the shaded curve denotes the resampling distribution. () Pairwise relationships between the 3 HIV-1 infection parameters. Pearson’s ρ correlation coefficient and the regression line are shown on each scatter plot, together with the bivariate mean and its 95% confidence ellipse for A/A homozygotes and for carriers of allele rs179008 T. values from Hotelling’s test on the difference of mean vectors between the 2 groups.