Loss of melanocytes is the pathological hallmark of vitiligo, a chronic inflammatory skin depigmenting disorder induced by exaggerated immune response, including autoreactive CD8 T cells producing high levels of type 1 cytokines. However, the interplay between this inflammatory response and melanocyte disappearance remains to be fully characterized. Here, we demonstrate that vitiligo skin contains a significant proportion of suprabasal melanocytes, associated with disruption of E-cadherin expression, a major protein involved in melanocyte adhesion. This phenomenon is also observed in lesional psoriatic skin. Importantly, apoptotic melanocytes were mainly observed once cells were detached from the basal layer of the epidermis, suggesting that additional mechanism(s) could be involved in melanocyte loss. The type 1 cytokines IFN-γ and TNF-α induce melanocyte detachment through E-cadherin disruption and the release of its soluble form, partly due to MMP-9. The levels of MMP-9 are increased in the skin and sera of patients with vitiligo, and MMP-9 is produced by keratinocytes in response to IFN-γ and TNF-α. Inhibition of MMP-9 or the JAK/STAT signaling pathway prevents melanocyte detachment in vitro and in vivo. Therefore, stabilization of melanocytes in the basal layer of the epidermis by preventing E-cadherin disruption appears promising for the prevention of depigmentation occurring in vitiligo and during chronic skin inflammation.

MMP-9 levels are increased in patients with vitiligo and correlate with soluble E-cadherin levels and surface of depigmentation. 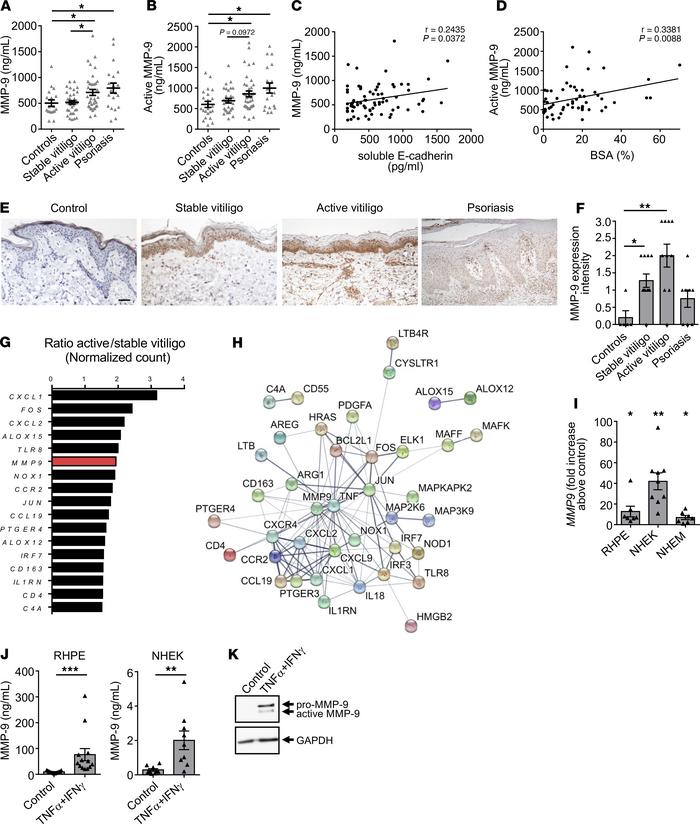