Relatively little is known about interactions between the airway microbiome and airway host transcriptome in asthma. Since asthma affects and is affected by the entire airway, studying the upper (e.g., nasal) and lower (e.g., bronchial) airways together represents a powerful approach to understanding asthma. Here, we performed a systematic, integrative study of the nasal and bronchial microbiomes and nasal and bronchial host transcriptomes of children with severe persistent asthma and healthy controls. We found that (a) the microbiomes and host transcriptomes of asthmatic children are each distinct by site (nasal versus bronchial); (b) among asthmatic children, Moraxella and Alloiococcus are hub genera in the nasal microbiome, while there are no hubs among bronchial genera; (c) bronchial Actinomyces is negatively associated with bronchial genes for inflammation, suggesting Actinomyces may be protective; (d) compared with healthy children, asthmatic children express more nasal genes for ciliary function and harbor more nasal Streptococcus; and (e) nasal genera such as Corynebacterium are negatively associated with significantly more nasal genes for inflammation in healthy versus asthmatic children, suggesting a potentially stronger protective role for such nasal genera in healthy versus asthmatic children. Our systematic, integrative study provides a window into host-microbiome associations in asthma.

Nasal versus bronchial microbiome in children with severe persistent asthma (step 2 in ). 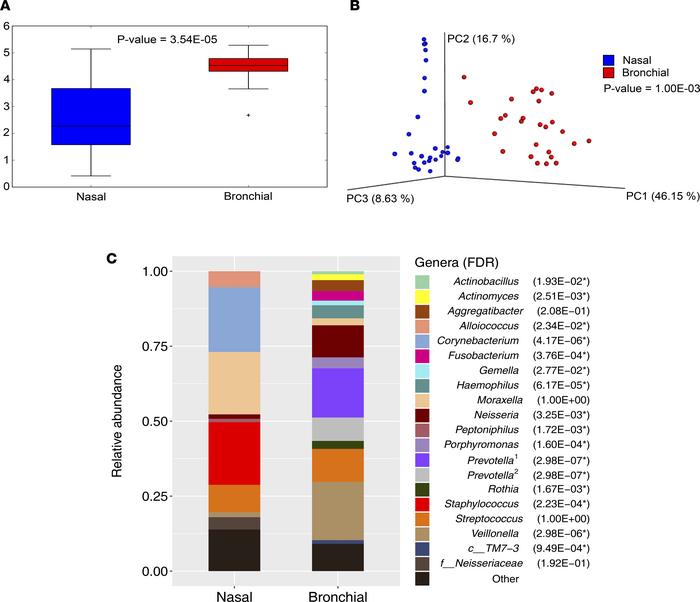 () Increased bacterial diversity of bronchial versus nasal microbiome in children with severe persistent asthma ( = 27). The α diversity was estimated by Shannon diversity index by subsampling 10 times for each sample at a rarefaction depth of 1950. values were calculated using Wilcoxon signed-rank test and FDR correction. () Principal Coordinates Analysis (PCoA) plot of weighted UniFrac distance shows clear separation of bacterial composition between the nasal and bronchial microbiome of children with severe persistent asthma ( = 27). Each point represents a sample and is colored by airway site. values were calculated using PERMANOVA with 1000 permutations. () Distinct mean relative abundances of bacterial genera in the nasal versus bronchial microbiomes of children with severe persistent asthma ( = 27). Genera representing < 1% of total abundance in each site are shown as Other. Sixteen of the 20 genera (80%) were differentially abundant by site (Wilcoxon signed-rank test FDR ≤ 0.05) and are marked with asterisks. For unnamed genera, the closest higher level named taxon is indicated. 1 genus affiliated with the family. 2 genus proposed as affiliated with by the Greengenes database v.13.8.