Influenza is a highly contagious viral pathogen with more than 200,000 cases reported in the United States during the 2017–2018 season. Annual vaccination is recommended by the World Health Organization, with the goal to reduce influenza severity and transmission. Currently available vaccines are about 60% effective, and vaccine effectiveness varies from season to season, as well as between different influenza subtypes within a single season. Immunological imprinting from early-life influenza infection can prominently shape the immune response to subsequent infections. Here, the impact of preexisting B cell memory in the response to quadrivalent influenza vaccine was assessed using blood samples collected from healthy subjects (18–85 years old) prior to and 21–28 days following influenza vaccination. Influenza vaccination increased both HA-specific antibodies and memory B cell frequency. Despite no apparent differences in antigenicity between vaccine components, most individuals were biased toward one of the vaccine strains. Specifically, responses to H3N2 were reduced in magnitude relative to the other vaccine components. Overall, this study unveils a potentially new mechanism underlying differential vaccine effectiveness against distinct influenza subtypes. 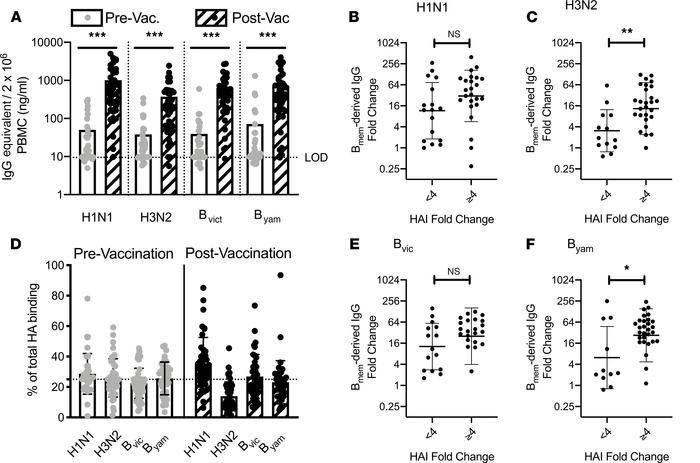 () Levels of memory B cell–derived (Bmem-derived) antibody (IgG) against the 4 vaccine strains prior to and 21–28 days following QIV measured by ELISA following in vitro differentiation of PBMC from healthy volunteers (18–65 years old). (, , , and ) Fold change following vaccination, in levels of HA-specific Bmem-derived IgG against each vaccine component, measured as in , in 40 donors categorized by HAI response to the corresponding vaccine strain. () Frequency of HA-specific Bmem-derived IgG to each strain of the total vaccine response prior to (left) and 21–28 days following (right) QIV, measured as in . * < 0.05, ** < 0.01, *** < 0.001 by 1-way ANOVA, Friedman test, and Dunn’s multiple comparisons; = 40