Warts, hypogammaglobulinemia, infections, and myelokathexis (WHIM) syndrome immunodeficiency is caused by autosomal dominant gain-of-function mutations in chemokine receptor CXCR4. Patient WHIM-09 was spontaneously cured by chromothriptic deletion of 1 copy of 164 genes, including the CXCR4WHIM allele, presumably in a single hematopoietic stem cell (HSC) that repopulated HSCs and the myeloid lineage. Testing the specific contribution of CXCR4 hemizygosity to her cure, we previously demonstrated enhanced engraftment of Cxcr4+/o HSCs after transplantation in WHIM (Cxcr4+/w) model mice, but the potency was not quantitated. We now report graded-dose competitive transplantation experiments using lethally irradiated Cxcr4+/+ recipients in which mixed BM cells containing approximately 5 Cxcr4+/o HSCs and a 100-fold excess of Cxcr4+/w HSCs achieved durable 50% Cxcr4+/o myeloid and B cell chimerism in blood and approximately 20% Cxcr4+/o HSC chimerism in BM. In Cxcr4+/o/Cxcr4+/w parabiotic mice, we observed 80%–100% Cxcr4+/o myeloid and lymphoid chimerism in the blood and 15% Cxcr4+/o HSC chimerism in BM from the Cxcr4+/w parabiont, which was durable after separation from the Cxcr4+/o parabiont. Thus, CXCR4 haploinsufficiency likely significantly contributed to the selective repopulation of HSCs and the myeloid lineage from a single chromothriptic HSC in WHIM-09. Moreover, the results suggest that WHIM allele silencing of patient HSCs is a viable gene therapy strategy.

donor BM cells have a strong selective advantage over donor BM cells for reconstituting myeloid and B cells in the blood of lethally irradiated mice. 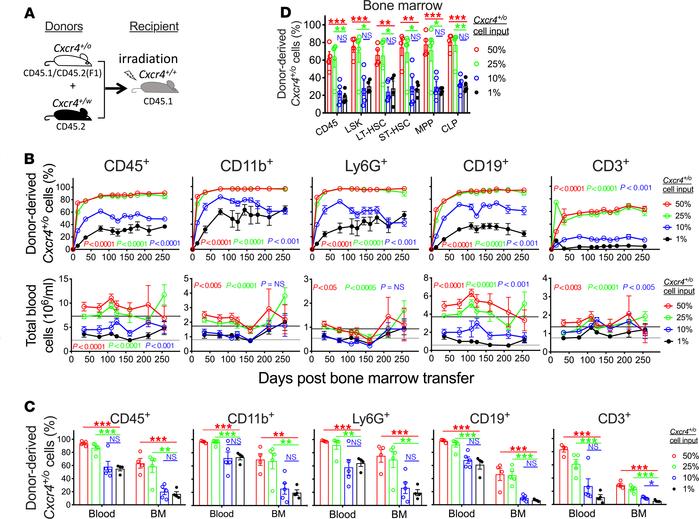 () Experimental design. genotypes and congenic CD45 isoforms are indicated above and below the mouse cartoons, respectively. A total of 5 million total BM cells were transplanted at different donor cell ratios, indicated as the percentage input cells on the right of , , and . () Time course of hematopoietic reconstitution. Each graph corresponds to the immunophenotypically defined blood cell subset indicated at the top of the column in which it is found. Top row of graphs: donor-derived blood cell chimerism, presented as the percentage (mean ± SEM) of the total cell number for each subset. Bottom row of graphs: total absolute blood counts for each leukocyte subset (mean ± SEM). Solid lines and dashed lines indicate average values of blood counts for each subset in unmanipulated control ( = 58) and ( = 38) mice in our colony. ( and ) Chimerism in BM versus blood for donor-derived mature leukocytes () and HSCs and HPCs in BM (). The blood data are the same as at day 256 for the top graphs in , the day when the experiment was terminated for BM analysis. For all conditions, = 5 for each group. SEM was less than 5% of the mean at all time points lacking visible error bars. The experiment was repeated once with a similar pattern. In , values are color coded to refer to the corresponding color-coded input percentage result compared with the 1% input cell result. * < 0.05; ** < 0.01; *** < 0.005. Single comparisons, Student’s test; multiple comparisons, 2-way ANOVA. LSK, lineage–Sca-1+c-Kit+ BM cells; LT- and ST-HSC, long-term and short-term hematopoietic stem cells; MPP, multipotential progenitor cells; CLP, common lymphoid precursor cells.