Itch induces scratching that removes irritants from the skin, whereas pain initiates withdrawal or avoidance of tissue damage. While pain arises from both the skin and viscera, we investigated whether pruritogenic irritant mechanisms also function within visceral pathways. We show that subsets of colon-innervating sensory neurons in mice express, either individually or in combination, the pruritogenic receptors Tgr5 and the Mas-gene–related GPCRs Mrgpra3 and Mrgprc11. Agonists of these receptors activated subsets of colonic sensory neurons and evoked colonic afferent mechanical hypersensitivity via a TRPA1-dependent mechanism. In vivo intracolonic administration of individual TGR5, MrgprA3, or MrgprC11 agonists induced pronounced visceral hypersensitivity to colorectal distension. Coadministration of these agonists as an “itch cocktail” augmented hypersensitivity to colorectal distension and changed mouse behavior. These irritant mechanisms were maintained and enhanced in a model of chronic visceral hypersensitivity relevant to irritable bowel syndrome. Neurons from human dorsal root ganglia also expressed TGR5, as well as the human ortholog MrgprX1, and showed increased responsiveness to pruritogenic agonists in pathological states. These data support the existence of an irritant-sensing system in the colon that is a visceral representation of the itch pathways found in skin, thereby contributing to sensory disturbances accompanying common intestinal disorders.

, , and are expressed in both distinct and overlapping subpopulations of colon-innervating DRG neurons. 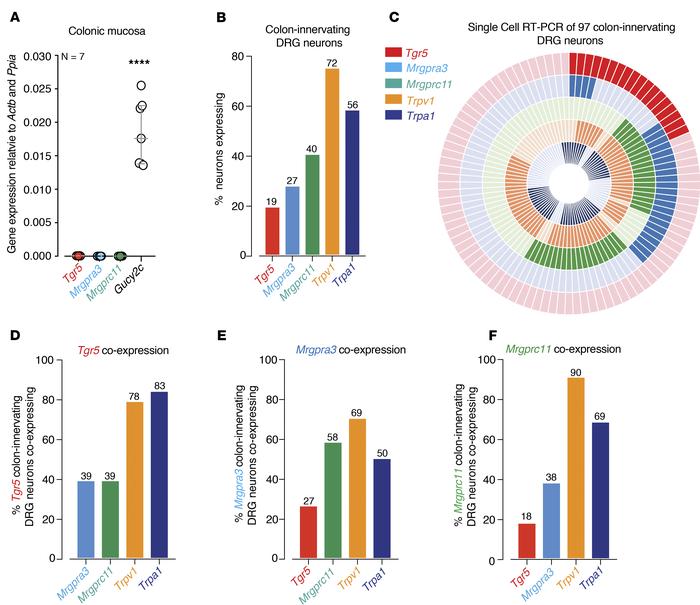 () qPCR analysis showing low mRNA abundance for , , and in the colonic mucosa compared with a known epithelial target (guanylate cyclase-C, **** < 0.0001, = 7; each dot represents data from an individual mouse). () Single-cell RT-PCR of 97 retrogradely traced colon-innervating DRG neurons (from = 5 mice) reveals that subpopulations express transcripts encoding (19%), (27%), (40%), (72%), and (56%). () Donut plot showing expression and coexpression of genes encoding , , , , and in 97 individual retrogradely traced colon-innervating DRG neurons. Each color represents an individual gene with expression marked by bold shading. is represented in the outer ring, with in the inner ring. Individual neurons are arranged radially, such that coexpression of genes in a single neuron can be easily identified running from outside to inside. Some neurons express all targets, while other neurons express combinations of targets. () Group data showing that () , () , and () are expressed individually within subpopulations of colon-innervating DRG neurons and also coexpress together in other subpopulations. For example, of the -expressing colon-innervating DRG neurons from healthy mice, 39% coexpress and 39% coexpress . Furthermore, , , and also coexpress with (69%–90%) and (50%–83%). Data in represent mean ± SEM, with values determined by 1-way ANOVA with Tukey’s multiple comparison tests.