The cardiac hormone atrial natriuretic peptide (ANP) is a central regulator of blood volume and a therapeutic target in hypertension and heart failure. Enhanced ANP activity in such conditions through inhibition of the degradative enzyme neprilysin has shown clinical efficacy but is complicated by consequences of simultaneous accumulation of a heterogeneous array of other hormones. Targets for specific ANP enhancement have not been available. Here, we describe a cis-acting antisense transcript (NPPA-AS1), which negatively regulates ANP expression in human cardiomyocytes. We show that NPPA-AS1 regulates ANP expression via facilitating NPPA repressor RE1-silencing transcription factor (REST) binding to its promoter, rather than forming an RNA duplex with ANP mRNA. Expression of ANP mRNA and NPPA-AS1 was increased and correlated in isolated strained human cardiomyocytes and in hearts from patients with advanced heart failure. Further, inhibition of NPPA-AS1 in vitro and in vivo resulted in increased myocardial expression of ANP, increased circulating ANP, increased renal cGMP, and lower blood pressure. The effects of NPPA-AS1 inhibition on NPPA expression in human cardiomyocytes were further marked under cell-strain conditions. Collectively, these results implicate the antisense transcript NPPA-AS1 as part of a physiologic self-regulatory ANP circuit and a viable target for specific ANP augmentation.

facilitates binding of the repressive transcription factor REST to the promoter. 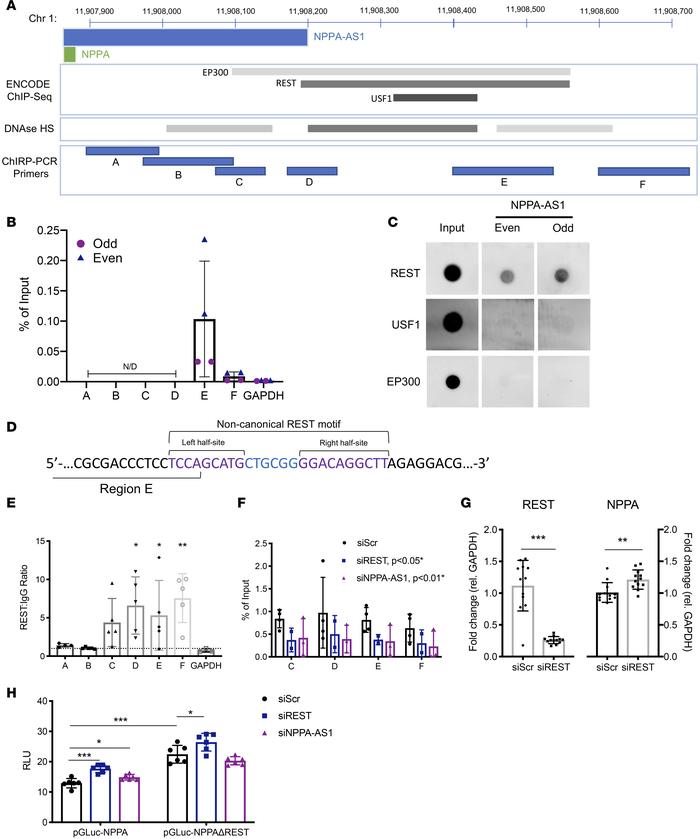 () Schematic overview of the genomic region 1 kb upstream of the transcription start site (GRCh37/hg19 assembly). Indicated are the positions of the ChIRP primer pairs A–F. ENCODE ChIP-Seq transcription factor binding sites and DNase I hypersensitivity clusters are also indicated. The darkness of gray boxes is proportional to the maximum signal strength in the ENCODE v3 database. () qRT-PCR analysis of human atrial DNA coprecipitated with 2 independent ChIRP probe sets specific for (“Even” and “Odd”). N/D, not detected. () Dot blots for protein coprecipitated with probes specific for . See complete unedited blots in the supplemental material. () Depiction of the noncanonical REST motif in the promoter and its overlap with region E. Indicated are the 2 half-sites and linker sequence as proposed by Johnson et al. (). () REST ChIP-qPCR in iPS-CMs across the promoter. The promoter was included as a negative control. The ChIP signal is expressed normalized to the negative control IgG ChIP for each region. The Kruskal-Wallis test was used to compare the ChIP signal for each individual region with the signal for the negative control () region. * < 0.05, ** < 0.01 after adjustments for multiple comparisons using Dunn’s test. () REST ChIP-qPCR of iPS-CMs transfected with siRNA specific for REST, , or negative control siRNA, examining REST occupancy across regions C–F of the promoter. The ChIP signal is expressed relative to input DNA. *Two-way ANOVA was used to test the effect of each siRNA treatment on ChIP signal across all regions compared to negative control siRNA. REST occupancy was decreased with siREST and siNPPA-AS1 compared with negative control siRNA, < 0.05 and < 0.01, respectively. () qRT-PCR quantification of REST and expression in iPS-CMs transfected with siRNA specific for REST. Results are expressed relative to and normalized to the mean of the control group. ** < 0.01, *** < 0.001 using the Mann-Whitney test. () Promoter reporter assay signals in cells cotransfected with pGLuc-NPPA or pGLuc-NPPAΔREST and siREST or siNPPA-AS1. Two-way ANOVA was used to test differences within and between groups. * < 0.05, ** < 0.01, *** < 0.001 after adjusting for multiple comparisons using Tukey’s test. For all graphs, mean and standard deviation are shown. All results are based on at least 2 separate experiments with 2–6 replicates for each condition or treatment group.