BACKGROUND There is growing evidence to suggest that the brain is an important target for insulin action and that states of insulin resistance may extend to the CNS, with detrimental effects on cognitive functioning. Although the effect of systemic insulin resistance on peripheral organs is well studied, the degree to which insulin affects brain function in vivo remains unclear.METHODS This randomized, single-blinded, 2-way–crossover, sham-controlled, pilot study determined the effects of hyperinsulinemia on functional MRI (fMRI) brain activation during a 2-back working memory task in 9 healthy older adults (aged 57–79 years). Each participant underwent 2 clamp procedures (an insulin infusion and a saline placebo infusion, with normoglycemia maintained during both conditions) to examine the effects of hyperinsulinemia on task performance and associated blood oxygen level–dependent (BOLD) signal using fMRI.RESULTS Hyperinsulinemia (compared with saline control) was associated with an increase in both the spatial extent and relative strength of task-related BOLD signal during the 2-back task. Further, the degree of increased task-related activation in select brain regions correlated with greater systemic insulin sensitivity as well as decreased reaction times and performance accuracy between experimental conditions.CONCLUSION Together, these findings provide evidence of insulin action in the CNS among older adults during periods of sustained cognitive demand, with the greatest effects noted for individuals with highest systemic insulin sensitivity.FUNDING This work was funded by the NIH (5R21AG051958, 2016). 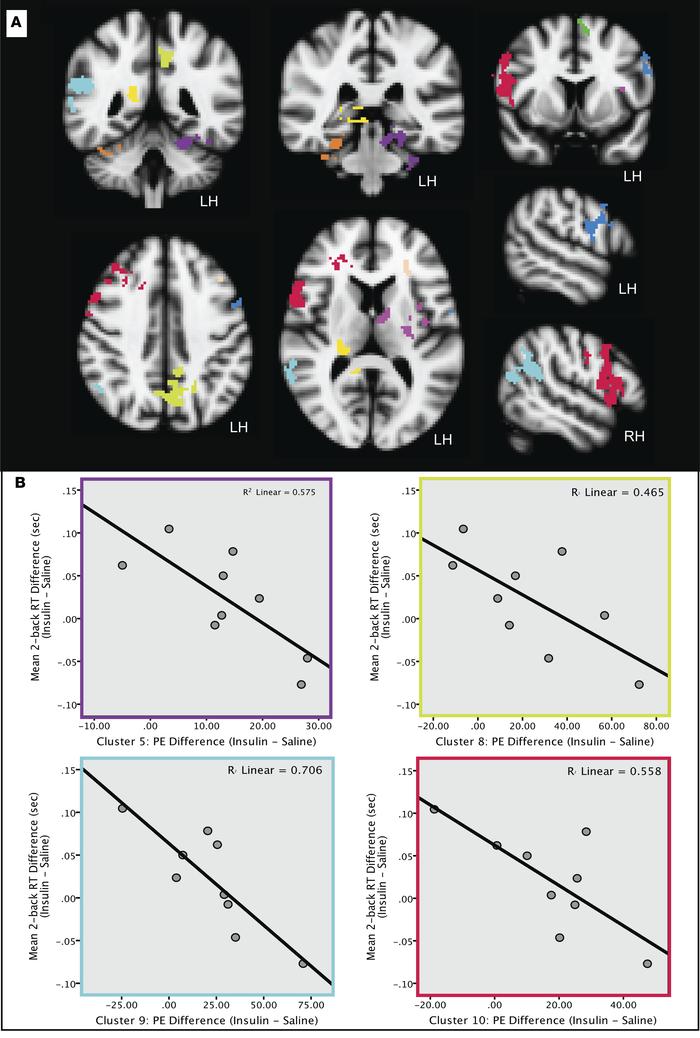 () Cluster-based results of a 2-step higher-level analysis to evaluate average within-subject difference in 2-back to 0-back contrast between insulin and saline conditions ( = 9). First, subject-level repeated-measure analysis was performed to yield a single cope comparing blood oxygen level–dependent (BOLD) signal during the contrast of interest (2-back to 0-back) between insulin and saline runs. Next, each within-subject difference cope was entered into a single 1-sample group mean regression model to identify brain regions that consistently demonstrated a change in BOLD signal during the 2-back task between the insulin and saline conditions, such that the mean change in activation across all participants was significantly different from the null hypothesis of no change. Final -statistic maps were thresholded using clusters determined by > 2.3 ( < 0.01) and a corrected cluster significance threshold of < 0.05. Significant differences in task-related BOLD signal were noted in bilateral inferior frontal, parahippocampal, precuneus, and thalamic regions, as well as lateralized clusters within right superior frontal, right supramarginal, and left middle frontal cortices. () Scatter plots demonstrating significant bivariate correlations between the degree of BOLD signal parameter estimate (PE) change during insulin compared with saline conditions and difference in RT on 2-back trials between conditions ( = 9; < 0.05 for all). Colored outline around scatter plots corresponds to the matching cluster color from which its data were extracted. Clusters are described in greater detail in (cluster 5, left fusiform/supramarginal gyrus; cluster 8, bilateral precuneus; cluster 9, right supramarginal/angular gyrus; and cluster 10, right inferior frontal cortex).