Retinopathy of prematurity (ROP) is a disorder of the developing retina of preterm infants. ROP can lead to blindness because of abnormal angiogenesis that is the result of suspended vascular development and vaso-obliteration leading to severe retinal stress and hypoxia. We tested the hypothesis that the use of the human progenitor cell combination, bone marrow–derived CD34+ cells and vascular wall–derived endothelial colony–forming cells (ECFCs), would synergistically protect the developing retinal vasculature in a mouse model of ROP, called oxygen-induced retinopathy (OIR). CD34+ cells alone, ECFCs alone, or the combination thereof were injected intravitreally at either P5 or P12 and pups were euthanized at P17. Retinas from OIR mice injected with ECFCs or the combined treatment revealed formation of the deep vascular plexus (DVP) while still in hyperoxia, with normal-appearing connections between the superficial vascular plexus (SVP) and the DVP. In addition, the combination of cells completely prevented aberrant retinal neovascularization and was more effective anatomically and functionally at rescuing the ischemia phenotype than either cell type alone. We show that the beneficial effects of the cell combination are the result of their ability to orchestrate an acceleration of vascular development and more rapid ensheathment of pericytes on the developing vessels. Lastly, our proteomic and transcriptomic data sets reveal pathways altered by the dual cell therapy, including many involved in neuroretinal maintenance, and principal component analysis (PCA) showed that cell therapy restored OIR retinas to a state that was closely associated with age-matched normal retinas. Together, these data herein support the use of dual cell therapy as a promising preventive treatment for the development of ROP in premature infants. 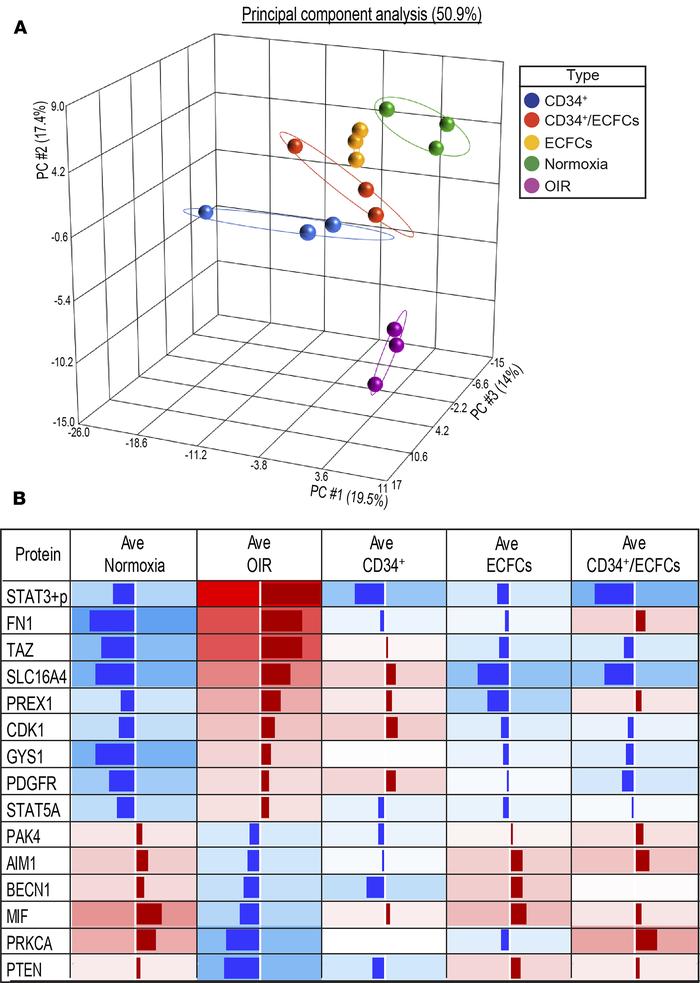 () Principal component analysis (PCA) from proteomic data sets demonstrates closer association of cell therapy–treated OIR retinas with control (normoxia) retinas. () Proteomic analysis of contralateral OIR retinas from the transcriptomic data set treated with CD34+, ECFCs, or CD34+/ECFCs. Shown are the proteins that were significantly changed in the OIR model ( < 0.05), and whose expression was reversed by either cell treatment. Some of these proteins are discussed in the text (STAT3, PDGFR, STAT5A, AIM1, BECN1, PTEN, PRKCA, MIF, PAK4). Data represent NormLog2-Median Centered expression data, averaged (Ave) per set. Red, upregulated; blue, downregulated. In each case, the intensity of the color and the length of the column is proportional to the level of expression. Stat3+p, phosphorylated STAT3.