Aberrant activity of the glycoprotein 130 130/JAK/STAT3 (gp130/JAK/STAT3) signaling axis is a recurrent event in inflammation and cancer. In particular, it is associated with a wide range of hematological malignancies, including multiple myeloma and leukemia. Novel targeted therapies have only been successful for some subtypes of these malignancies, underlining the need for developing robust mouse models to better dissect the role of this pathway in specific tumorigenic processes. Here, we investigated the role of selective gp130/JAK/STAT3 activation by generating a conditional mouse model. This model targeted constitutively active, cell-autonomous gp130 activity to B cells, as well as to the entire hematopoietic system. We found that regardless of the timing of activation in B cells, constitutively active gp130 signaling resulted in the formation specifically of mature B cell lymphomas and plasma cell disorders with full penetrance, only with different latencies, where infiltrating CD138+ cells were a dominant feature in every tumor. Furthermore, constitutively active gp130 signaling in all adult hematopoietic cells also led to the development specifically of largely mature, aggressive B cell cancers, again with a high penetrance of CD138+ tumors. Importantly, gp130 activity abrogated the differentiation block induced by a B cell–targeted Myc transgene and resulted in a complete penetrance of the gp130-associated, CD138+, mature B cell lymphoma phenotype. Thus, gp130 signaling selectively provides a strong growth and differentiation advantage for mature B cells and directs lymphomagenesis specifically toward terminally differentiated B cell cancers. 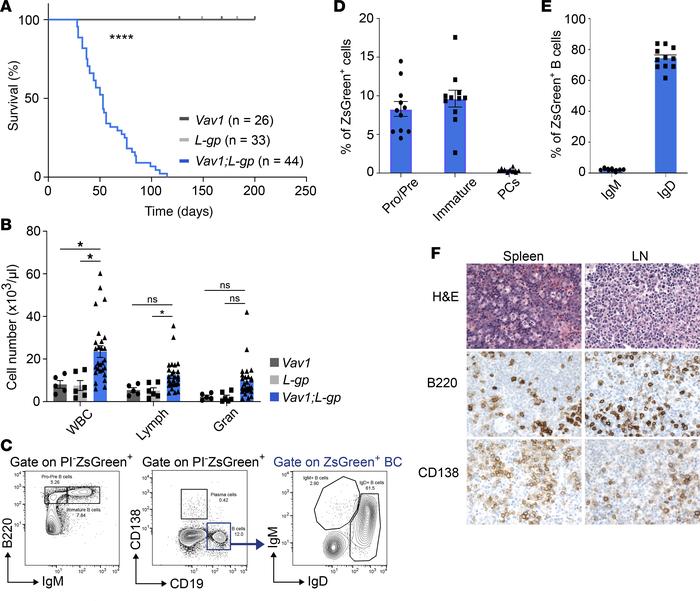