Inflammatory airway diseases, such as asthma, cystic fibrosis (CF), and chronic obstructive pulmonary disease (COPD), are characterized by mucus hypersecretion and airway plugging. In both CF and asthma, enhanced expression of the Ca2+-activated Cl– channel TMEM16A is detected in mucus-producing club/goblet cells and airway smooth muscle. TMEM16A contributes to mucus hypersecretion and bronchoconstriction, which are both inhibited by blockers of TMEM16A, such as niflumic acid. Here we demonstrate that the FDA-approved drug niclosamide, a potent inhibitor of TMEM16A identified by high-throughput screening, is an inhibitor of both TMEM16A and TMEM16F. In asthmatic mice, niclosamide reduced mucus production and secretion, as well as bronchoconstriction, and showed additional antiinflammatory effects. Using transgenic asthmatic mice, we found evidence that TMEM16A and TMEM16F are required for normal mucus production/secretion, which may be due to their effects on intracellular Ca2+ signaling. TMEM16A and TMEM16F support exocytic release of mucus and inflammatory mediators, both of which are blocked by niclosamide. Thus, inhibition of mucus and cytokine release, bronchorelaxation, and reported antibacterial effects make niclosamide a potentially suitable drug for the treatment of inflammatory airway diseases, such as CF, asthma, and COPD. 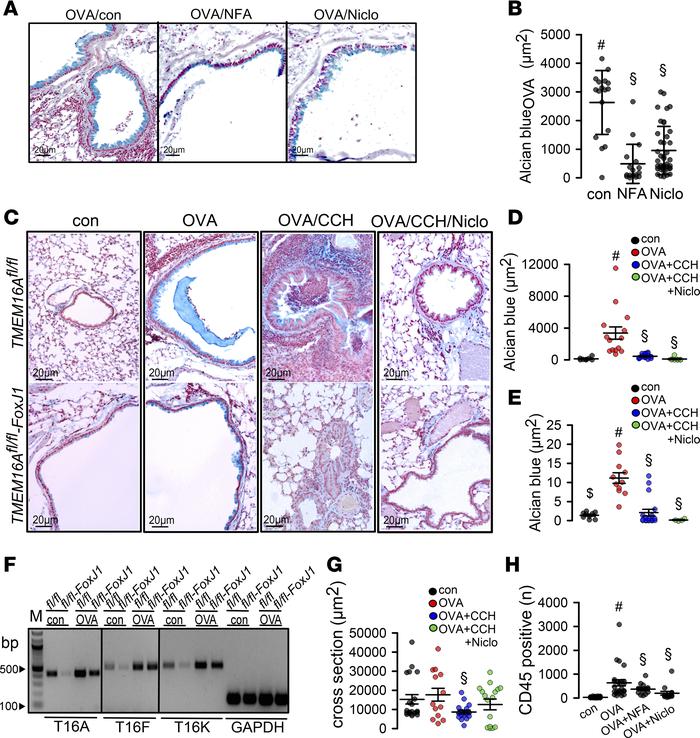