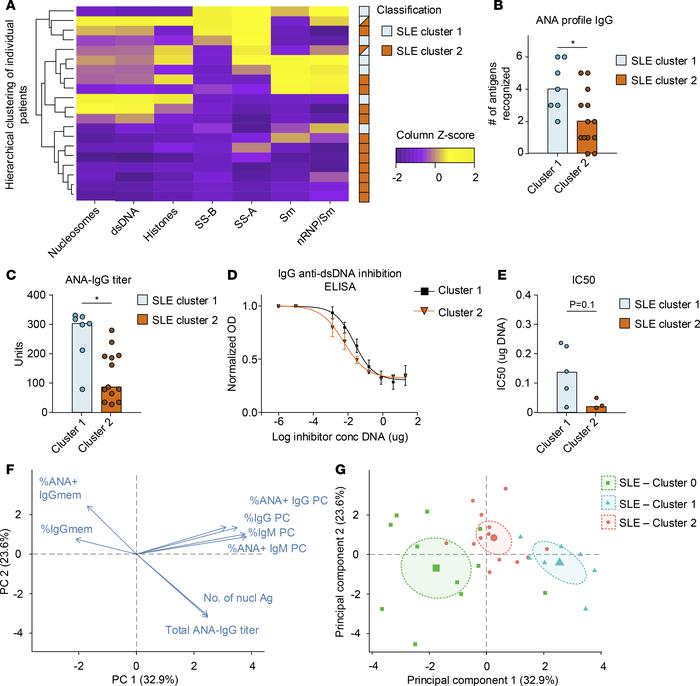 ( and ) Profiles of recognition of nuclear antigens by serum IgG. Patients are separated based on classification, as described in , into cluster 1 and cluster 2. () Heatmap, including hierarchical clustering based on the profile of antigen recognition. Blocks that show 2 colors represent the patients in which the classification changed over time (), in which case the top left triangle represents the classification in the first measurement and the lower right represents the classification in the second measurement. () The number of nuclear antigens recognized. Each dot indicates an individual patient, and the bars represent the median. () Total ANA-IgG was determined by ELISA. ( and ) Relative affinity of anti-dsDNA IgG was measured in serum of SLE patients by inhibition ELISA. () Relative OD (average ± SEM) of each group is shown. () IC50 values for each individual patient. ( and ) Principal component analysis of all parameters analyzed (frequencies of ANA+ and total B cell and PC subsets as well as ELISA recognition of nuclear antigens). The percentage indicated on the axis is the percentage of variance explained by that principal component. A selection of the vectors for direction of parameters is shown here. The parameters omitted here (ANA+ and total transitional and naive B cells) are shown in . Their directionality remained the same. SLE patients were clustered as described in . () The variables contributing to each dimension in principal component analysis. The length and direction of each arrow shows the strength of their contribution to each PC. () The coordinates of each SLE patient. Ellipses represent the 95% confidence interval for each group. * < 0.05, using Mann Whitney test. ANA, antinuclear antibody; PC, plasmablast/plasma cell; SS-A/B, anti–Sjögren’s syndrome–related antigen; Sm, Smith antigen; SLE, systemic lupus erythematosus.