Fetal exposure to the maternal microbiota in humans and mice

Fetal exposure to the maternal microbiota in humans and mice

Previous studies have demonstrated the presence of microbial DNA in the fetal environment. However, it remains unclear whether this DNA represents viable bacteria and how it relates to the maternal microbiota across body sites. We studied the microbiota of human and mouse dyads to understand these relationships, localize bacteria in the fetus, and demonstrate bacterial viability. In human preterm and full-term mother-infant dyads at the time of cesarean delivery, the oral cavity and meconium of newborn infants born as early as 24 weeks of gestation contained a microbiota that was predicted to originate from in utero sources, including the placenta. Using operative deliveries of pregnant mice under highly controlled, sterile conditions in the laboratory, composition, visualization, and viability of bacteria in the in utero compartment and fetal intestine were demonstrated by 16S rRNA gene sequencing, fluorescence in situ hybridization, and bacterial culture. The composition and predicted source of the fetal gut microbiota shifted between mid- and late gestation. Cultivatable bacteria in the fetal intestine were found during mid-gestation but not late gestation. Our results demonstrate a dynamic, viable mammalian fetal microbiota during in utero development.

Identification of bacterial DNA in the murine fetal intestine by FISH of the 16S rRNA gene. 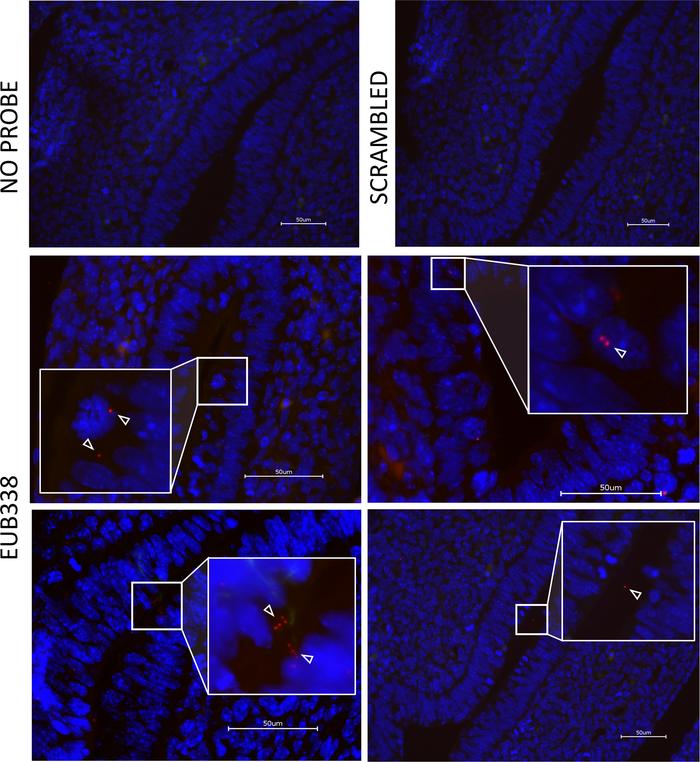 Intestinal tissue sections were obtained from fetal mice at E12–14 and were stained with DAPI and probed with Cy3-labeled eubacterial probe EUB338 and a scrambled-probe control. Images were acquired by confocal microscopy. Scale bar: 50 μm. Magnification, 10×.