The autoantigen-specific Tregs from pluripotent stem cells (PSCs), i.e., PSC-Tregs, have the ability to suppress autoimmunity. PSC-Tregs can be programmed to be tissue associated and to infiltrate into local inflamed tissues to suppress autoimmune responses after adoptive transfer. Nevertheless, the mechanisms by which the autoantigen-specific PSC-Tregs suppress the autoimmune response remain to be fully elucidated. In this study, we generated functional autoantigen-specific Tregs from the induced PSC (iPSCs), i.e., iPSC-Tregs, and investigated the underlying mechanisms of autoimmunity suppression by these Tregs in a type 1 diabetes (T1D) murine model. A double-Tg mouse model of T1D was established in F1 mice, in which the first generation of RIP-mOVA Tg mice that were crossed with OT-I T cell receptor (TCR) Tg mice was challenged with vaccinia viruses expressing OVA (VACV-OVA). We show that adoptive transfer of OVA-specific iPSC-Tregs greatly suppressed autoimmunity in the animal model and prevented the insulin-secreting pancreatic β cells from destruction. Further, we demonstrate that the adoptive transfer significantly reduced the expression of ICAM-1 in the diabetic pancreas and inhibited the migration of pathogenic CD8+ T cells and the production of the proinflammatory IFN-γ in the pancreas. These results indicate that the stem cell–derived tissue-associated Tregs can robustly accumulate in the diabetic pancreas, and, through downregulating the expression of ICAM-1 in the local inflamed tissues and inhibiting the production of proinflammatory cytokine IFN-γ, suppress the migration and activity of the pathogenic immune cells that cause T1D.

Downregulation of IFN-γ by autoantigen-specific iPSC-Tregs in the diabetic pancreatic islets. 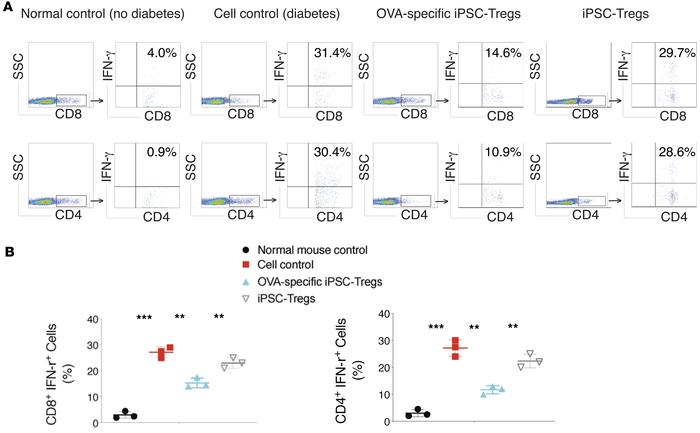 Mice were sacrificed 4 weeks after adoptive cell transfer, and single cell suspension was prepared from the pancreatic lymph nodes (LNs). Cells were stimulated with plate-coated CD3 and soluble CD28 antibodies, and then stained with CD4, CD8, and IFN-γ for flow cytometric analysis. () IFN-γ production in CD4+ or CD8+ population. Data shown are the representative of 3 identical experiments. () Quantification of IFN-γ production. Data shown are representative of 3 identical experiments (** < 0.01; *** < 0.001, 1-way ANOVA).