The prefrontal cortex controls food reward seeking and ingestion, playing important roles in directing attention, regulating motivation toward reward pursuit, and assigning reward salience and value. The cell types that mediate these behavioral functions, however, are not well described. We report here that optogenetic activation of vasoactive intestinal peptide–expressing (VIP-expressing) interneurons in both the infralimbic (IL) and prelimbic (PL) divisions of the medial prefrontal cortex in mice is sufficient to reduce acute, binge-like intake of high-calorie palatable food in the absence of any effect on low-calorie rodent chow intake in the sated animal. In addition, we discovered that the behavioral mechanisms associated with these changes in feeding differed between animals that underwent either IL or PL VIPergic stimulation. Although IL VIP neurons showed the ability to reduce palatable food intake, this effect was dependent upon the novelty and relative value of the food source. In addition, IL VIP neuron activation significantly reduced novel object and novel social investigative behavior. Activation of PL VIP neurons, however, produced a reduction in high-calorie palatable food intake that was independent of food novelty. Neither IL nor PL VIP excitation changed motivation to obtain food reward. Our data show how neurochemically defined populations of cortical interneurons can regulate specific aspects of food reward–driven behavior, resulting in a selective reduction in intake of highly valued food.

SSFO expression in the PL and IL. 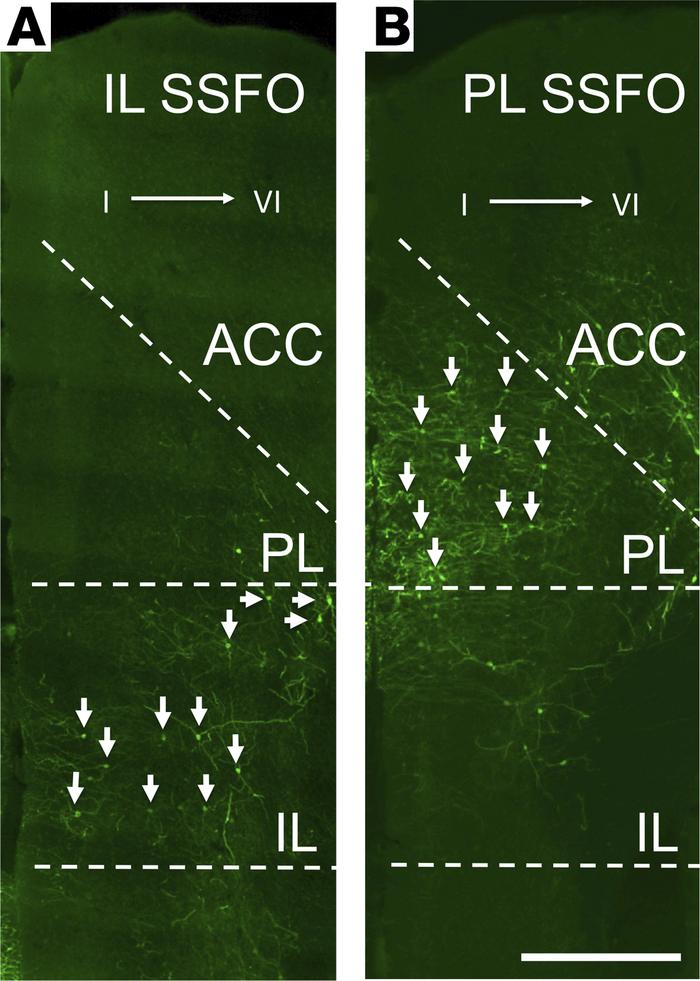 AAV-driven expression of SSFO was selective for the IL () and PL (). Arrowheads indicate SSFO-expressing neurons in representative images of animals with AAV injections targeted to either the IL or PL cortex. Expression of SSFO was observed in all study animals between +1.7 mm and +1.98 mm rostral of the bregma, corresponding to panels 17 to 19 in Paxinos and Franklin (). Relative position of cortical layers I → VI indicates orientation of the coronal slice. Scale bar: 500 μm.