Fusobacterium nucleatum is an oral anaerobe prevalent in intrauterine infection associated with a wide spectrum of adverse pregnancy outcomes. We demonstrate here that F. nucleatum triggers placental inflammation through maternal, rather than paternal, TLR4-mediated signaling. Elimination of TLR4 from maternal endothelial cells alleviated placental inflammation and reduced fetal and neonatal death, while elimination of TLR4 in the hematopoietic cells had no effect. The placental inflammatory response followed a spatiotemporal pattern, with NF-κB activation observed first in the maternal endothelial cells and then in the decidual cells surrounding the endothelium, followed by induction of inflammatory cytokines and chemokines. Supplementation of pregnant mice with fish oil as a source of omega-3 fatty acids suppressed placental inflammation, reduced F. nucleatum proliferation in the placenta, and increased fetal and neonatal survival. In vitro analysis illustrates that omega-3 fatty acids inhibit bacterial-induced inflammatory responses from human umbilical cord endothelial cells. Our study therefore reveals a mechanism by which microbial infections affect pregnancy and identifies a prophylactic therapy to protect against intrauterine infections. 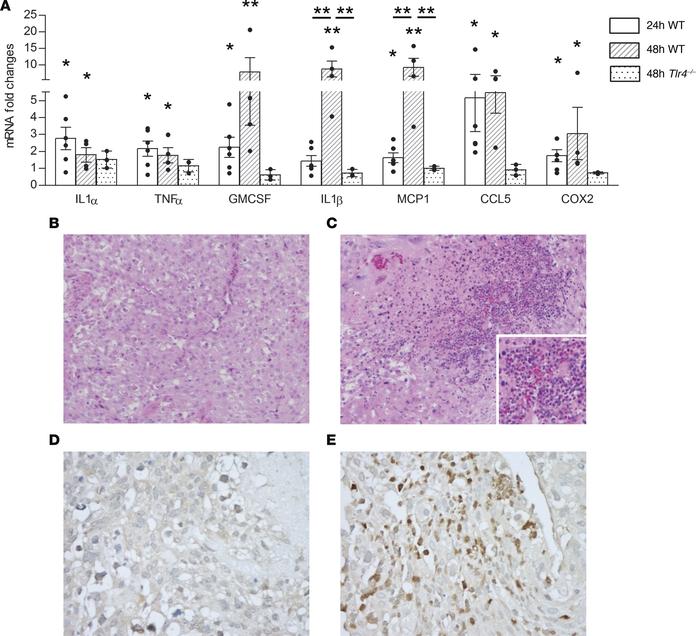 On day 16 or 17 of gestation, each C57BL/6 wild-type or mouse received approximately 107 CFU of . 12230 or saline. () At 24 or 48 hours after injection, the placentas were collected for RNA extraction. The mRNA levels of inflammatory cytokines and chemokines were measured by real-time quantitative PCR and are expressed as fold change compared to the saline-injected control group. At least 4 pregnant mice were included in each group. The results are presented as dot plots with average and SEM. Two-way ANOVA was performed with simple-effects analysis when the interaction was significant. Student-Newman-Keuls was applied for post-hoc comparisons. * < 0.05, ** < 0.01. (–) H&E staining ( and ) and immunohistochemical staining of IL-1β ( and ) in the decidua of wild-type mice at 48 hours after injection with saline ( and ) or approximately 107 CFU of . ( and ). Original magnification, ×100 ( and ); ×500 ( and ); zoom, 3-fold from ×100 image (insets). Representative image from 4 placentas from 2 dams of each group was selected.