Although mucoactive proteins, such as epidermal growth factor (EGF), could improve clinical outcomes of intestinal ulcerative diseases, their gastrointestinal application is limited because of their proteolytic digestion or concerns about tumor promotion. In the present study, ATP-binding cassette (ABC) transporter–linked secretion of human EGF from probiotic Escherichia coli (EGF-EcN) was created to promote beneficial actions of the EGF receptor, which is notably attenuated in patients with intestinal ulcerative injuries. Preventive and postinjury treatment with EGF-EcN alleviated intestinal ulcers and other readouts of disease severity in murine intestinal ulcer models. EGF-EcN administration promoted the restitutive recovery of damaged epithelial layers, particularly via upward expansion of highly proliferating progenitor cells from the lower crypts. Along with the epithelial barrier benefit, EGF-EcN improved goblet cell–associated mucosal integrity, which controls the access of luminal microbiota to the underlying host tissues. Despite concern about the oncogenic action of EGF, EGF-EcN did not aggravate colitis-associated colon cancer; instead, it alleviated protumorigenic activities and improved barrier integrity in the lesions. All findings indicate that probiotic bacteria–based precision delivery of human EGF is a promising mucosal intervention against gastrointestinal ulcers and malignant distress through crypt-derived barrier restoration.

Construction and application of EGF-EcN in experimental gut models. 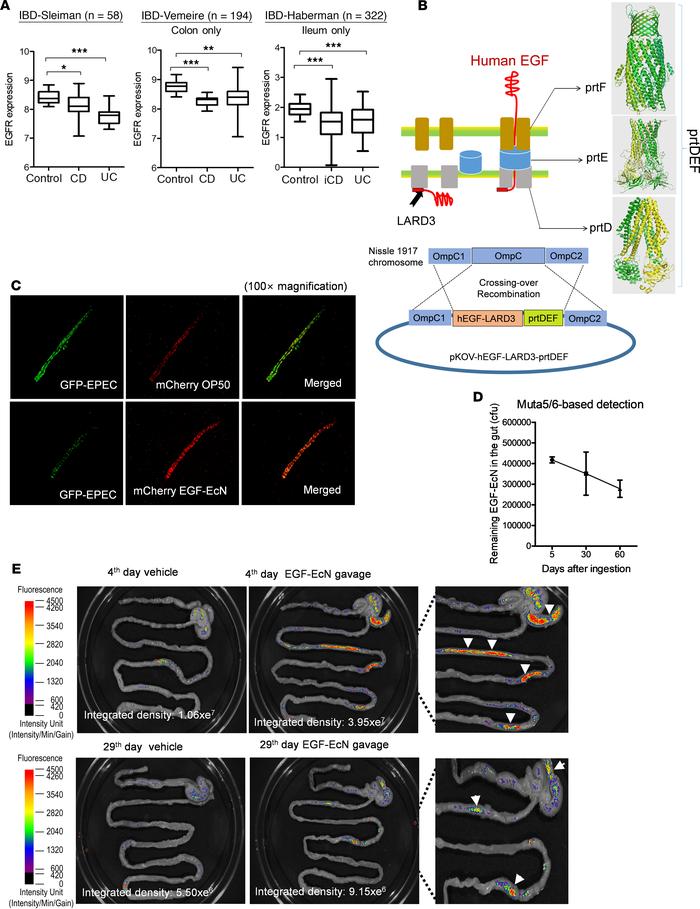 () EGFR expression levels in the colon or ileum of patients with Crohn’s disease (CD) or ulcerative colitis (UC). Three data sets (Sleiman’s, Gene Expression Omnibus [GEO] ID GSE10616, = 58; Vemeire’s, GEO ID GSE75214, = 194; and Haberman’s GEO ID GSE57945, = 322) were compared. Haberman’s samples were only from the ileum from patients with UC or ileocolonic CD (iCD). The asterisks in box-and-whisker plots (min to max) represent significant differences between 2 groups (* < 0.05, ** < 0.01, and *** < 0.001 using 2-tailed, unpaired Student’s test). The box plot depicts the minimum and maximum values (whiskers), the upper and lower quartiles, and the median. The length of the box represents the interquartile range. () The scheme for the bacterial secretion of LARD3-linked EGF protein through prtDEF. Genes for human mature EGF polypeptide linked to 1 fragment of LARD3 and prtDEF in pKOV vector were encoded in the bacterial chromosome by a crossing-over recombination at the OmpC region. Based on SWISS-MODEL (), expected binding modes in the bacterial membrane are depicted, based on SWISS-MODEL. () Colonization activity of . OP50 and EGF-EcN in . intestine in the presence of mucoadherent enteropathogenic . (EPEC). Gut colonization was assessed in wild-type (N2) . after 24 hours of preincubation with mCherry-labeled nonpathogenic . (OP50 or EGF-EcN) in the presence of GFP-labeled EPEC (original magnification, ×100). The pictures are representative of 10 independent observations. () Stool samples from EGF-EcN–treated mice were collected at indicated times after gavage. Colonized bacteria levels were estimated based on PCR with EcN-specific primers for Muta5/6. () GFP-labeled EGF-EcN (1 × 109 CFU/200 μL) in the gut after gavage. The isolated intestines were observed on the 4th and 29th days after gavage. The colonizing bacteria were visualized in the intestine via an in vivo imaging system.