Epicardial adipose tissue (EAT) is the visceral fat depot of the heart. Inflammation of EAT is thought to contribute to coronary artery disease (CAD). Therefore, we hypothesized that the EAT of patients with CAD would have increased inflammatory gene expression compared with controls without CAD. Cardiac surgery patients with (n = 13) or without CAD (n = 13) were consented, and samples of EAT and subcutaneous adipose tissue (SAT) were obtained. Transcriptomic analysis was performed using Affymetrix Human Gene 1.0 ST arrays. Differential expression was defined as a 1.5-fold change (ANOVA P < 0.05). Six hundred ninety-three genes were differentially expressed between SAT and EAT in controls and 805 in cases. Expression of 326 genes was different between EAT of cases and controls; expression of 14 genes was increased in cases, while 312 were increased in controls. Quantitative reverse transcription PCR confirmed that there was no difference in expression of CCL2, CCR2, TNF-α, IL-6, IL-8, and PAI1 between groups. Immunohistochemistry showed more macrophages in EAT than SAT, but there was no difference in their number or activation state between groups. In contrast to prior studies, we did not find increased inflammatory gene expression in the EAT of patients with CAD. We conclude that the specific adipose tissue depot, rather than CAD status, is responsible for the majority of differential gene expression.

Comparison of gene expression between SAT and EAT in controls. 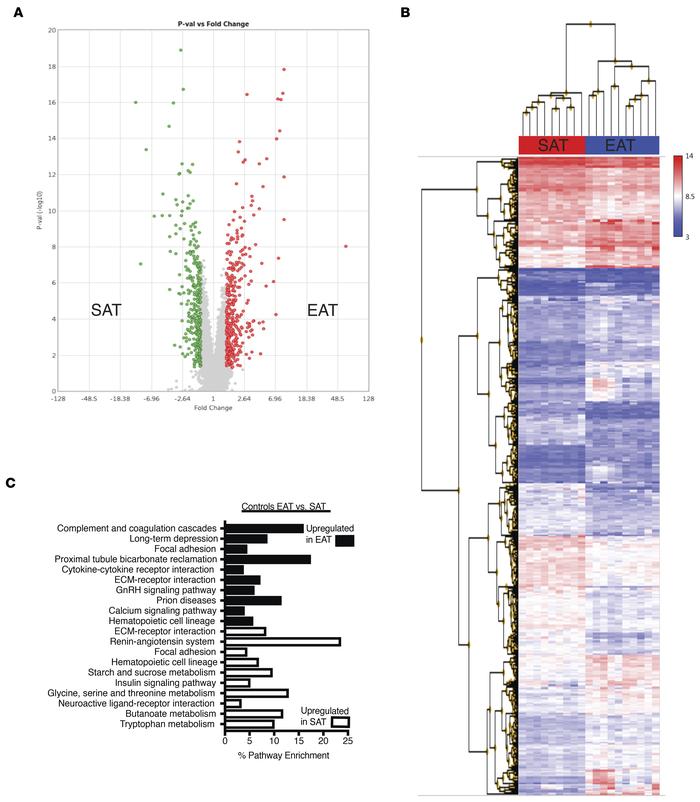