VEGF-C is an important mediator of lymphangiogenesis and has been shown to alleviate chronic inflammation in a variety of disease models. In this study, we investigated whether targeted delivery of VEGF-C to sites of inflammation and site-specific activation of lymphatic vessels would represent a clinically feasible strategy for treating chronic skin inflammation. To this end, we generated a fusion protein consisting of human VEGF-C fused to the F8 antibody (F8-VEGF-C), which is specific for the alternatively spliced, angiogenesis-marking extradomain A (EDA) of fibronectin. In two mouse models of psoriasis-like skin inflammation, mediated by transgenic VEGF-A overexpression or repeated application of imiquimod, intravenous treatment with F8-VEGF-C but not with untargeted VEGF-C significantly reduced ear skin edema and was as effective as the clinically used TNF-α receptor-Fc fusion protein (TNFR-Fc). Treatment with F8-VEGF-C led to a marked expansion of lymphatic vessels in the inflamed skin and significantly improved lymphatic drainage function. At the same time, treatment with F8-VEGF-C significantly reduced leukocyte numbers, including CD4+ and γδ T cells. In sum, our results reveal that targeted delivery of VEGF-C and site-specific induction of lymphatic vessels represent a potentially new and promising approach for the treatment of chronic inflammatory diseases. 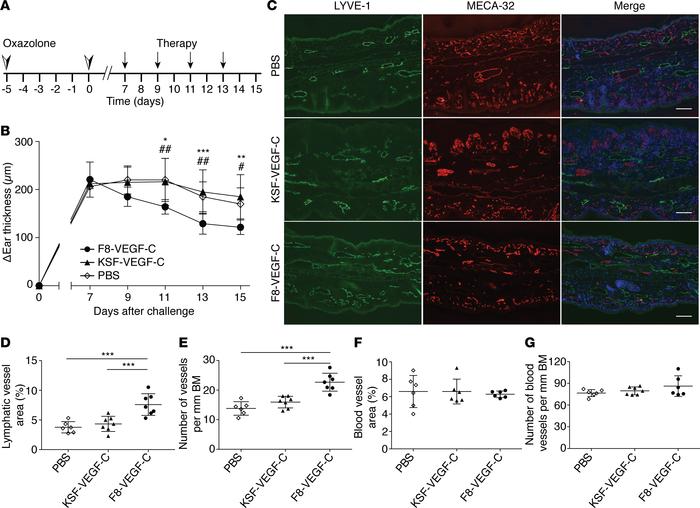