Chronic tubulointerstitial injury impacts the prognosis of focal segmental glomerulosclerosis (FSGS). We found that the level of versican V1 was increased in tubular cells of FSGS patients. Tubular cell–derived versican V1 induced proliferation and collagen synthesis by activating the CD44/Smad3 pathway in fibroblasts. Both urine C3a and suPAR were increased and bound to the tubular cells in FSGS patients. C3a promoted the transcription of versican by activating the AKT/β-catenin pathway. C3aR knockout decreased the expression of versican in Adriamycin-treated (ADR-treated) mice. On the other hand, suPAR bound to integrin β6 and activated Rac1, which bound to SRp40 at the 5′ end of exon 7 in versican pre-mRNA. This binding inhibited the 3′-end splicing of intron 6 and the base-pair interactions between intron 6 and intron 8, leading to the formation of versican V1. Cotreatment with ADR and suPAR specifically increased the level of versican V1 in tubulointerstitial tissues and caused more obvious interstitial fibrosis in mice than treatment with only ADR. Altogether, our results show that C3a and suPAR drive versican V1 expression in tubular cells by promoting transcription and splicing, respectively, and the increases in tubular cell–derived versican V1 induce interstitial fibrosis by activating fibroblasts in FSGS. 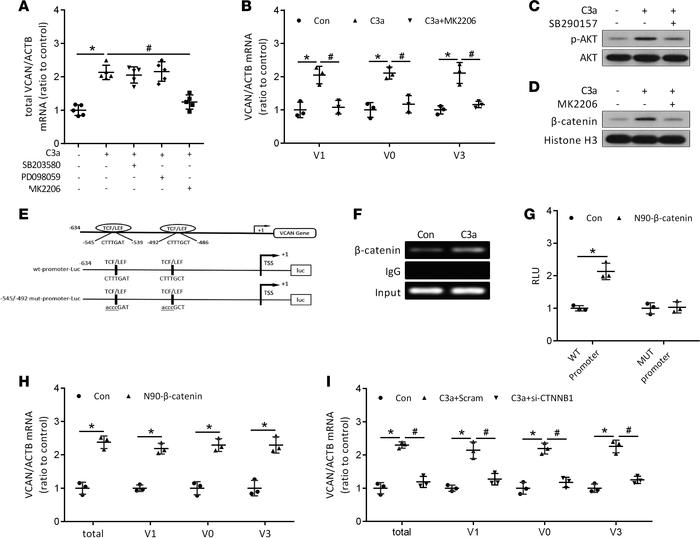