Brain death that occurs in the setting of deceased organ donation for transplantation is associated with systemic inflammation of unknown origin. It has recently been recognized that mitochondria-derived damage-associated molecular patterns (mtDAMPs) released into the circulation in the setting of trauma and tissue injury are associated with a systemic inflammatory response. We examined the blood of deceased organ donors and found elevated levels of inflammatory cytokines and chemokines that correlated with levels of mtDAMPs. We also found that donor neutrophils are activated and that donor plasma contains a neutrophil-activating factor that is blocked by cyclosporin H, a formyl peptide receptor-1 antagonist. Examination of donor plasma by electron microscopy and flow cytometry revealed that free- and membrane-bound mitochondria are elevated in donor plasma. Interestingly, we demonstrated a correlation between donor plasma mitochondrial DNA levels and early allograft dysfunction in liver transplant recipients, suggesting a role for circulating mtDAMPs in allograft outcomes. Current approaches to prolong allograft survival focus on immune suppression in the transplant recipient; our data indicate that targeting inflammatory factors in deceased donors prior to organ procurement is another potential strategy for improving transplant outcomes.

Elevated levels of N-formylated peptides are present in the circulation of deceased organ donors. 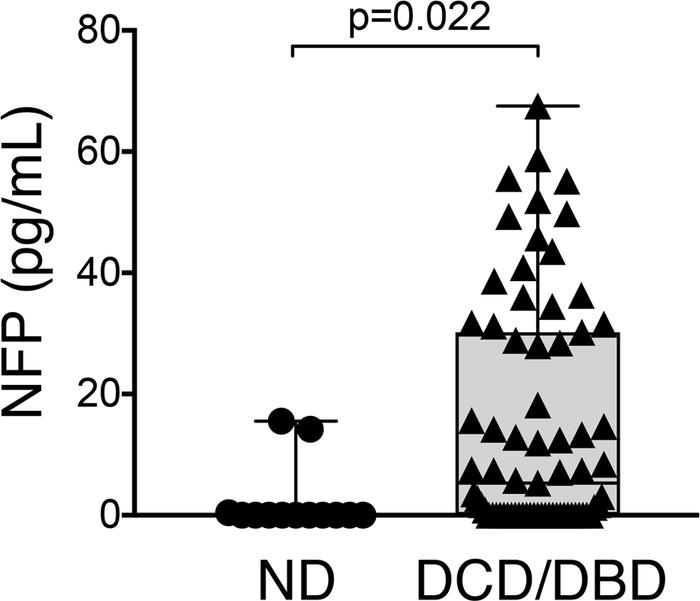