BACKGROUND. The prevalence of chronic kidney disease (CKD) is increasing worldwide. The identification of factors contributing to its progression is important for designing preventive measures. Previous studies have suggested that chronically high vasopressin is deleterious to renal function. Here, we evaluated the association of plasma copeptin, a surrogate of vasopressin, with the incidence of CKD in the general population. METHODS. We studied 3 European cohorts: DESIR (n = 5,047; France), MDCS-CC (n = 3,643; Sweden), and PREVEND (n = 7,684; the Netherlands). Median follow-up was 8.5, 16.5, and 11.3 years, respectively. Pooled data were analyzed at an individual level for 4 endpoints during follow-up: incidence of stage 3 CKD (estimated glomerular filtration rate [eGFR] < 60 ml/min/1.73 m2); the KDIGO criterion “certain drop in eGFR”; rapid kidney function decline (eGFR slope steeper than –3 ml/min/1.73 m2/yr); and incidence of microalbuminuria. RESULTS. The upper tertile of plasma copeptin was significantly and independently associated with a 49% higher risk for stage 3 CKD (P < 0.0001); a 64% higher risk for kidney function decline, as defined by the KDIGO criterion (P < 0.0001); a 79% higher risk for rapid kidney function decline (P < 0.0001); and a 24% higher risk for microalbuminuria (P = 0.008). CONCLUSIONS. High copeptin levels are associated with the development and the progression of CKD in the general population. Intervention studies are needed to assess the potential beneficial effect on kidney health in the general population of reducing vasopressin secretion or action. FUNDING. INSERM and Danone Research Centre for Specialized Nutrition.

Flow diagram of the participants in the study. 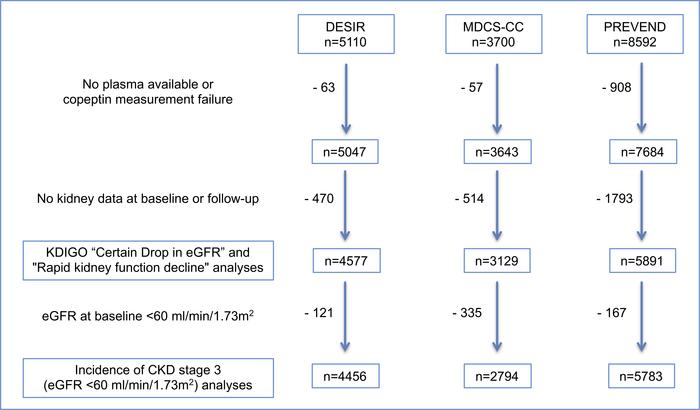 Copeptin was measured in 16,374 participants from the DESIR, MDCS-CC, and PREVEND cohorts (women 50.5%, 59.9%, and 52.6%, respectively). People for whom CKD status at baseline or at the end of follow-up could not be ascertained ( = 2,777) were excluded from the analyses. Thus, analyses were carried out with data from 13,597 participants.