Chikungunya virus (CHIKV) causes acute and chronic rheumatologic disease. Pathogenic CHIKV strains persist in joints of immunocompetent mice, while the attenuated CHIKV strain 181/25 is cleared by adaptive immunity. We analyzed the draining lymph node (dLN) to define events in lymphoid tissue that may contribute to CHIKV persistence or clearance. Acute 181/25 infection resulted in dLN enlargement and germinal center (GC) formation, while the dLN of mice infected with pathogenic CHIKV became highly disorganized and depleted of lymphocytes. Using CHIKV strains encoding ovalbumin-specific TCR epitopes, we found that lymphocyte depletion was not due to impaired lymphocyte proliferation. Instead, the accumulation of naive lymphocytes transferred from the vasculature to the dLN was reduced, which was associated with fewer high endothelial venule cells and decreased CCL21 production. Following NP-OVA immunization, NP-specific GC B cells in the dLN were decreased during pathogenic, but not attenuated, CHIKV infection. Our data suggest that pathogenic, persistent strains of CHIKV disable the development of adaptive immune responses within the dLN.

Stromal cells in the dLN are not targets of productive CHIKV infection. 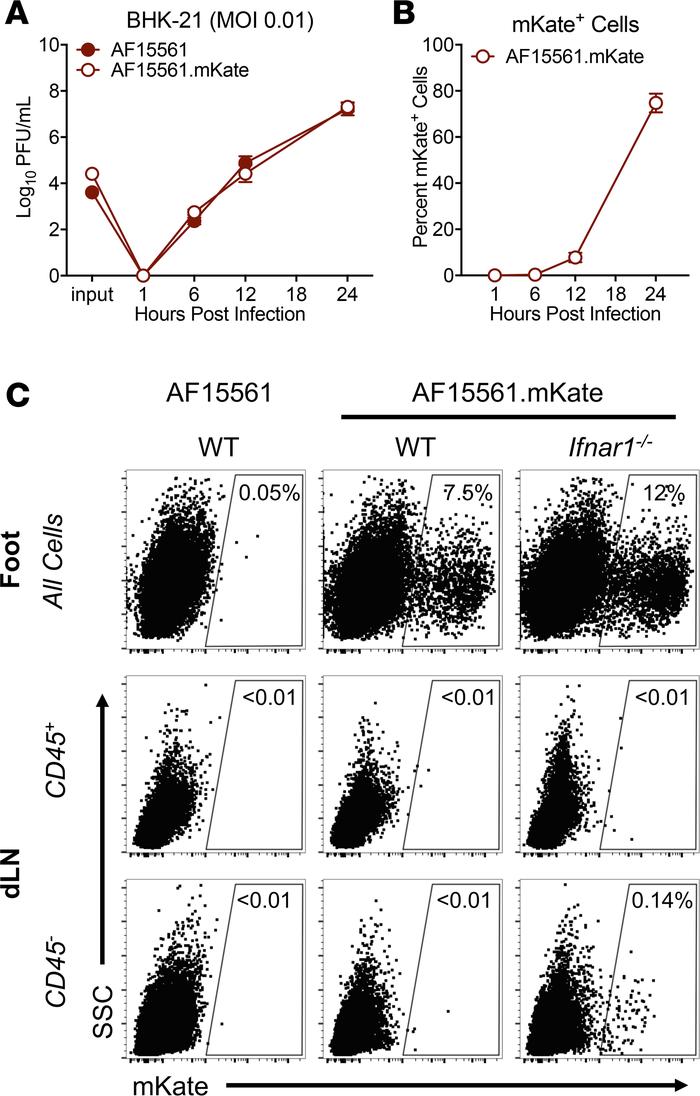 ( and ) BHK-21 cells were inoculated with AF15561 or AF15561.mKate and () virus yields or () the percentage of mKate+ cells were quantified at the indicated time points. Data represent the mean ± SEM and are combined from 2 independent experiments. () WT or mice were inoculated with 103 PFU of AF15561 or AF15561.mKate in both rear footpads. At 24 hpi, the foot was processed by collagenase/DNase digest. The percentage of mKate+ cells was determined by flow cytometry. mKate expression was also determined from CD45+ (top panels) and CD45– (bottom panels) cells from pooled dLNs (4–6 dLNs per group) of WT or mice infected with AF15561 or AF15561.mKate for 24 hours. Data are representative of 5 independent experiments.